A chord is a series of three notes or more. Major chords are made from the first, third, and fifth notes of the corresponding major scale of the same name, minor chords are made using the first, flatted third, and fifth notes, a seventh chord is a major with the seventh note of the scale added, and a suspended four chord is made by getting rid of (suspending) the third degree altogether and replacing it with the fourth note of the scale. To illustrate chord construction, look at the G major scale. The notes are G-A-B-C-D-E-F#. The first, third, and fifth notes of this scale are G-B-D. Those three notes are required to build a G major chord. Flatting the third note, the B, gives you a G minor. Applying the other constructions I mentioned to this scale will produce the chords I mentioned, and these rules apply to every key, so even without a chord book, if you know how to find notes on your guitar, making chords is easy. Guitar chords for beginners include a handful of chords in the first position, meaning within the first five to seven frets. These chords are called open chords because they often have open strings in them and cannot be shifted without altering the structure of the chord, unlike barre chords, which are based on open chords but barred with a finger to make them moveable without changing shape. The chart below shows some open chords a beginner should know. These chords are very basic and learning them will allow you to strum along to countless songs. The second chart shows the barre chord shapes I mentioned. You’ll see that these chords look familiar to the open chords, but using one finger to create the barre means you can slide up and down the next of the guitar without changing your fingering and get a new chord named after the root (usually the lowest note) of the chord. 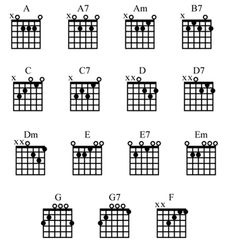 Check out this cool lesson on basic chords BASIC CHORD LESSON Roots of chords are usually the lowest note, but you can play inversions of chords. AN inversion is simply changing the note on the bottom. If you have a C-E-G (a C major chord) with the root, C, in the lowest place and you want to play a first inversion C major, simply move the C to the top so the chords is spelled E-G-C. The notes are the same, but now you have E in the lowest position, which may be useful for creating a specific bass line or harmonic variations. Piano players use inversions quite often. The guitar chords for beginners I mentioned above are essential learning for the beginning guitarist. Where you go after that is up to you. For all of you newbies, I recommend you to check out our beginner course: ULTIMATE BEGINNER GUITAR COURSE