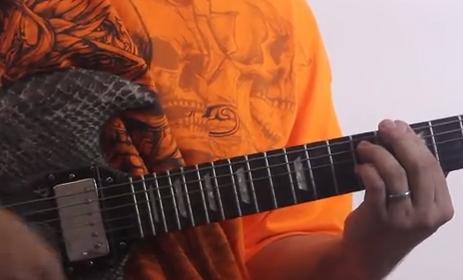 About The Bm11 Chord

The B minor eleven chord (Bm11) is a six-note chord that is normally played inverted with omitted notes and/or inverted and is constructed by adding a third to a minor ninth chord.

Okay so the chord I want to show you today is the B minor 11 (Bm11) chord and it sounds like this… Okay so I’m here on the seventh fret B and I’m going to start out a B minor 7 Barre chord; so I’m gonna bar my first finger across all the strings and then normally I will just play one finger on the 9th fret, that’s ring finger on the 9th fret of the A string, that gives me a B minor 7. So you may be familiar with that already; now all I’m gonna do is put my pinkie on the 9th fret of the G string. So that chord has a very cool sound and it has to go somewhere, it wants to resolve, so what you can do is just go Bm11 and to B major and there’s other voicings of the minor eleven that I’m going to show you in Chord Mastery.

Alright, so I hope you enjoyed that and got something out of it. Stay tuned for more info I’m going to be sharing some more cool sounds and stuff with you and again chord mastery 4.0 it’s going to be amazing and it’s only going to be $1. So keep an eye on your email box and the blog and we’ll get you more goodies coming real soon. Thanks for watching and have a great day.