How to Play Twilight Zone by Golden Earring

In this Guitar Control lesson, Instructor Robert Baker, is going to show you how to play the Twilight Zone chords and all the main riffs in this classic Golden Earring song. This is a really cool song, and actually very simple. Even the solo is not too difficult. So this is a great one to learn quickly and for all level of players, especially for beginners. However if you are an advanced player and you want to dive even deeper into this song, there are definitely a lot of additional intricate parts.

This riff is kind of confusing but not. They are using a pretty simple pattern but they kind of flip it around. It’s kind of funny because the Twilight Zone chords are B minor, E, and F and thats all that they’re basically outlining here in this riff, so this entire song is basically these chords except for the pre-chorus. For the first part, Robert uses his point mostly and starts by picking the 2nd fret 5th string, then the open 4th string, then the 2nd fret 3rd string, back to the open 4th string. Then he repeats it again. It is important to take notice to the rhythm and timing, the notes are the same, but the first time through is different that the second rhythmically. Robert is adding in some palm muting and also choking the strings a little bit with his fretting hand to give this riff a real stiff sound and that’s what you want for this if, you don’t want the notes to be trailing off. The second part to this riff starts with an open 6th string, then the 2nd fret 5th string to the 2nd fret 4th string, to the open 4th string. Repeat that twice and do the same thing we did with the first part of this riff, where you repeat it twice but the rhythm from the first time is different than the second. So the first part of the riff and the second part of the riff have the same rhythm in that both of these parts are played twice with the first time through being different from the second. The next part of this riff is based off of an F# minor chord, so the easiest way to play it is to just make the F# minor power chord shape and keep it held down while you arpeggiate the chord. The term arpeggiate means to hold a chord shape but instead of strum it, you pick the strings in a pattern one at a time. So the first part of this riff was based off of the B minor chord, the second off of E, and now for the third part we are basing it around the F# minor. If you aren’t familiar with the F# minor bar chord, place your pointer finger on the 2nd fret 6th string and bar it all the way down through the 1st string, so putting pressure on every single string on the 2nd fret. Then place your ring finger on the 5th string 4th fret, and your pinky finger right under it on the 4th string 4th fret. To play this part you don’t technically have to put your ring finger down on the 5th string because we are not using this note at all, but with it down it’s an F# minor chord, which is the chord Robert was referring to. You may have noticed that Robert didn’t place his down for this riff because it’s just one extra finger to worry about and we aren’t going to use it so there is no reason for it to be there. The notes we are using are the 6th string 2nd fret, the 4th string 4th fret, then the 3rd string 2nd fret, and then back to the 4th string 4th fret. Same amount of times and rhythm as the previous two shapes. And remember, Robert is playing this with a heavy mute, he still gets the strings to ring together a little bit, but really likes the staccato feel of muting this riff. And that is that riff! You will definitely be here lot’s more of it in this song. Remember the timing of it is very important, the way that you time the notes out.

The chorus has a little more distortion going on and there’s about three different guitars playing, but we are of course only going to be focusing on one. We are focusing on the guitar that is walking down. This part is moving a one power chord shape. A power chord is when you just play the root and the 5th of the scale together. Power chords are not major or minor, and the benefit to them is that unlike open chords where each chord looks totally different and uses different fingers and frets, a power chord is one shape that you simply will just move to the root of the power chord that you want to play. You can add in the octave if you want or leave it out, that it’s totally optional. I will explain how to play the power chord shape with the first chord we use, but after that I will just give the fret number. This riff starts with a B5. The B note we are going to use is on the 6th string 7th fret. Place your pointer on the 6th string 7th fret and your ring finger on the 5th string 9th fret. If you want to add in the octave, place your pinky directly under your ring finger, on the 4th string 9th fret. Then just strum these three strings, the 6th, 5th, and 4th. If you only want to play the two string version you would only strum the 6th and 5th strings, so only strum the amount of strings that your fingers are holding down frets on. Also if you are doing the two string version you don’t have to use your ring finger to hold down the 5th string, you can use your ring or pinky finger, whatever you feel is the most comfortable. So after that E5 move this same power chord shape down two frets to the 5th fret playing an A5 power chord now and strum once. Then move down another two frets to the 3rd fret and play the G5 power chord strumming it once, and then move down one fret to the 2nd fret now playing an F#5 also just with one strum. Then play all of those chord again. B5, to A5, to G5, to F#5. Robert mentions that he knows this isn’t necessarily the most exciting thing to play….just one strum on each chord, so what he does is he adds in some palm muting and chugs though in more of a straight eighth note rhythm and demonstrates this at the 6:53 minute mark. For those advanced players you will notice that behind this rhythm guitar there are a lot of things happening that you can figure out by ear or add in your own licks if you want to take this riff one step further.

The very end of the chorus is an open G major chord, place your middle finger on the 6th string 3rd fret, your pointer on the 5th string 2nd fret, your ring finger on the 2nd string 3rd fret, and your pinky on the 1st 3rd. You can simplify the G chord if you need to by playing the three string version instead The reason you can do three or four strings is because the 2nd string open is a B note and the 2nd string 3r dfret is a D note and both notes are in the G major chord, making that string have two different options. So everything would be the same but you wouldn’t place any finger on the 2nd string and you would not use your pinky on the 1st string 3rd fret, you would use your ring finger. This part comes in directly after the power chord walk down. Robert strums the open chords mostly on beat one and four of the same measure. See the video at the 7:36 minute mark to see him play both of these parts back to back.

Recap: How to Play Twilight Zone by Golden Earring

I hope you enjoyed learning the Twilight Zone chords, main riffs, and solo! What a fun song and a great one for beginners. Remember to pay high attention to detail, refer back to the video if you need to, and to of course, as always, have fun! 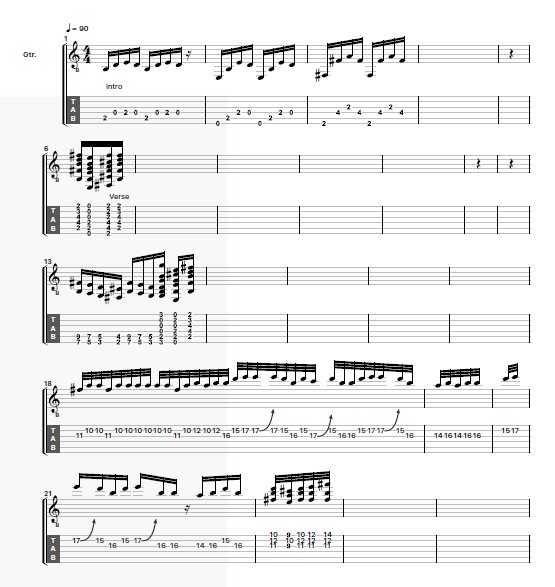