How to Play Same Old Song and Dance by Aerosmith

In this Guitar Control video, instructor, Robert Baker, is going to go over Aerosmith’s Same Old Song and Dance Chords and main riffs. Robert describes this song as a riff masterpiece and one of his all time favorite Aerosmith songs. It has a killer groove and tons of cool details that make it stand out. There’s a lot of double tracking in this song so today we are just going to go over the main riffs and parts of this song, or as Robert calls it, “the meat and potatoes”

First we are going to go over the iffs and the Same Old Song and Dance chords used to make these killer riffs. This is the main riff, but it does have two different versions, but don’t worry, we’re going to cover both! Version one, this riff is pretty simple. It is based off of this open E minor pentatonic scale. On the 6th string open to 3rd fret, on the 5th, 4th and 3rd strings you play the open strings to the 2nd fret, and on the 2nd and 1st strings you play the open strings to the 3rd fret. The riff starts by picking the 6th string open twice. If you want a thicker, heavier sound you can start with an open E5 power chord by just placing your pointer on the 5th string 2nd fret and picking both the 6th and 5th strings together instead of the open 6th string by itself. Both ways are right, it’s totally up to you which you prefer. Then with your middle finger go ahead and bend the 3rd fret 6th string down to create a total cool, bluesy feel and then pick the 5th string 2nd fret. Now pick the open 4th string twice, then back to the 5th string 2nd fret once, then pick the open 4th string again twice. Then bend the 6th string 3rd fret down again and pick the 6th string open once. Then do two E5 power chords! Place your pointer on the 5th string 7th fret and your ring finger on the 4th string 9th fret. You can play it there or you can play the same chord but a different voicing by holding down the 4th string 2nd fret with your pointer and your pinky on the 3rd string 4th fret. Robert prefers to play it here since he feels he hears the chord played higher than the voicing on the 5th string root. So again ending by picking the E5 twice. This is basically what the main riff is.

There is one thing that changes though. So after you do the opening part and then get to the E5 power chord, you just change the voicing you use for the E5. So still an E5 you just change where you play it, and this happens no matter which voicing you chose to do earlier. Now the E5 is played in the open position, much deeper than the other voicings. This E5 is played with an open 6th string and your pointer on the 5th string 2nd fret, strumming only these two strings, the 6th and 5th strings. Everything else is the same. You’re just adding that lower octave E5, of course, strumming it twice just like you did with the other E5 voicing. This riff is played behind the solo as well. The only time it really does the higher voicing of the E5 chord is the first time. Every other time is that open E5 we just went over. If you’re enjoying this Aerosmith song make sure also check out our video on how to play Sweet Emotion by Aerosmith for another song packed full of cool bluesy rock riffs.

When this next riff happens in the song it’s at the point where there are two guitar parts happening. This guitar won’t be tabbed out, because one guitar is doing a steady, constant low end rhythm on the open 6th string. While the other guitar is playing an E5 chord. So starting with the E5 where your pointer is on the 5th string 7th fret and your pinky is on the 4th string 9th fret. Strum the E5 once and then move down two frets to a D5. So now your pointer is on the 5th string 5th fret and pinky on the 4th string 7th fret and strum this chord twice. Followed by a lick. Pick the 8th fret 2nd string, then the 7th fret on the 3rd string, then 7th fret 4th string, and end with the E5 power chord on the 7th fret 5th string. Pick it once. After this riff we start getting into repeating riffs, but in a slightly different order. So back to the double stop riff and then the pull off lick and then all again! Where it gets a little tricky is when we go back to riff 3 but the final time it changes. In the middle of our final time through the double stop riff we actually go back and repeat it! See the video at about 7:07 to see Robert demonstrate this. It goes back to a lick we did in the beginning. Go to the 3rd fret on the the 5th and 4th string with your ring finger. Pick once and then do the same thing but now on the 1st fret same strings and pick twice, then back to the 3rd fret once and then now for the change, into an open A major chord, pointer in the 4th string 2nd fret and open 5th string. Into a C5 followed by a D5 on the 5th string and then now we are really just repeating riffs again.

For the change we start with a B5 power chord. Pointer on the 2nd fret 5th string and ring finger on the 4th string 4th fret and pinky right under your ring finger on the 3rd string 4th fret. Strum this chord twice, once down and once up. Then pick your pointer finger up so that the 5th string is now open. Strum the same strings again but now with the 5th string open and your ring finger and pinky still down where they were for the B5 chord. Then pick the 3rd fret 6th string with your middle finger down on the 6th string, and pick only that string, then place your pointer finger on the 2nd fret 6th string and pick that note and then an open 5th string, and back to the B5 and repeat all, it does this part for quite a while. This part happens before the next solo. Then chromatically move your B5 power chord to the 3rd fret where it becomes a C5, to the 4th fret becoming a C#5, to the 5th fret becoming the D5, to the 6th fret becoming a D#5, and last the 7th fret becoming an E5. All on the 5th string. Chromatic means next to one another, so all in a row when we moved from 2 to 3 to 4 to 5 to 6 to 7. And back into the same riffs again. So that is all the riffs!

Recap: How to Play Same Old Song and Dance by Aerosmith

I hope you guys enjoyed learning how to play Same Old Song And Dance by Aerosmith. This song is so fun, such a good Aerosmith song and so many classic riffs you are sure to recognize and realize you probably have heard and loved this song before this lesson! So remember to pay attention to the details and the slight variation that happen in this song and of course, as always, have fun! 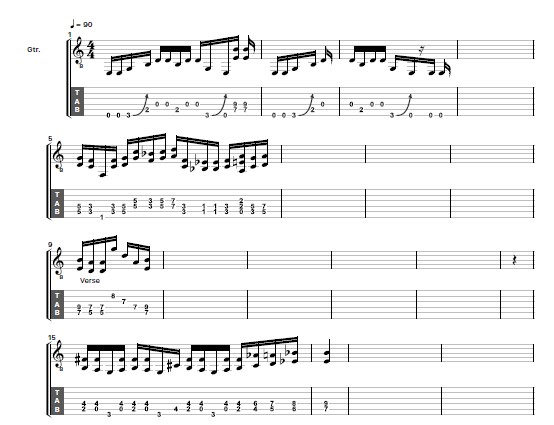 In this lesson from Guitar Control, instructor Sean Daniel demonstrates how to play Monster by Shawn Mendes & Justin Bieber on the acoustic guitar. This