Hey, how’s it going this is Jon McLennan with Guitar Control, bringing you this video hope you’re doing fantastic and today’s lesson is on a song called “God Only Knows” by The Beach Boys. We’re going to look at the all the parts of the song and we’re going to look at the intro, the verse, how it goes into sort of the refrain and then there’s like this orchestral sort of interlude in the middle then it goes to a bridge and back to the last verse and refrain all the way out. 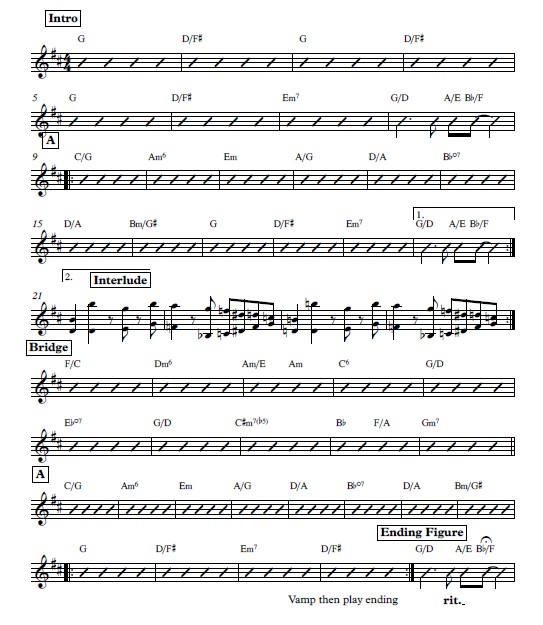 The song starts off on a G chord and I’ll be calling out the chords with regards to having a capo on the 2nd fret so the song is in the key of A, but I’ll be playing really in the key of G because I’ve got this capo here on the 2nd fret so the 1st chord is a G and the way that I play G is like most people the way they play G like this but without the first finger so it’s just one of the things that I do so get that melody so that’s our intro so I’m just going to play G for 4 beats 1, 2, 3, 4, and then I’m going to go to a D over F sharp which I play my first finger, again I played D a lot of times without that note on the 1st string and then I’m also bringing my thumb over the top to play the 2nd fret so get this sound so lead them back to G and then back to D over F sharp.

So in fact the 1st four bars just alternate chords G, F sharp and I’m thinking for up beats each 1, 2, 3, 4, 1, 2, 3, 4, next 4 bars goes G 2, 3, 4, 0 over F sharp now I play an E minor seven and that’s kind of like a G chord but I just take this finger and put it underneath the first finger on the 4th string 2nd fret and I get this chord it’s a great chord voicing A minor 7 and then I actually employ a little bit of hybrid picking for the next part so I play a G chord which these three strings are a G chord when they’re just played open and then I put a D in the bass here at the 5th fret so what’s happening is my pick on the 5th string and my middle and my ring are on the 3rd and 2nd strings like this I get this out it’s like claw you know goes together and that sets us up for the intro so a lot of times I’ll use my pinky here I barre at the 2nd fret kind of like an A shape and then move up to a B flat with an F in the bass so it’s G over D, A over E, B flat over F and it’s a cool sound having a triad with the 5th and the base it sounds very strong, so here’s the whole intro.

That’s it for the intro that really sets up the next section which is the verse here we go on the second inversion triad chords lead us into the verse and the verse begins on a C / G and the way I play that is kind of like a C chord of your standard but I take my third finger and put it on the 6th string so that’s the 1st next chord is A minor and again I do some weird things I play A minor with just two fingers here I cover this string of these two strings of and then A minor again I play E minor the same way and then A over G so this is kind of like an a chord with one finger barred and I put the G in the bass and then we’re going to go to a D with an A in the bass.

So one way you can do that is like this you could play the 4th fret right here the 2nd fret, 3rd fret and then a B flat diminished chord and you could do this the way that I play a triad so it’s not a fully diminished 7 but these frets would be starting on the 5th string 1, 2, 3, 2, then I go back to that G over A and then I’m going to go to a G sharp minor 7 flat 5 the way I play that chord is and that’s basically the verse there so D over A, 2, 3, 4, B5 diminished, D over A, G sharp minor 7 flat 5 and then you hit this little refrain which is that part so that would be a G chord to a D over F sharp and then any minor and then you tag it back with this little move that we did in the verse so what I’m going to do is I’m going to hold down the whole notes, going through these chords and I’m going to play the melody you hear the melody against it so here we go higher so let’s try it one more time just doing those whole notes here we go just beautiful so that section repeats twice and then we go into sort of this orchestral interlude and I’ve created this unique way of playing this section of the song.

For this next part we’ve got sort of that orchestral interlude and one of the things that I like to do if I have to play something like this you know on solo guitar I will come up with a way of playing it by playing the top melody and just the bass line so that’s kind of what I did with this as close as I could get it you know so I get this melody so let me show you what I’m doing there I’ve got the.. and again if you’re having trouble with this you can reference the tab I’m going to reference it here as well so you’ve got the 5th fret and the 4th fret and the 5th fret is on the 5th string and this is on the 3rd string so pinch those two notes together and then I go to 5 and 7 on the 5th string and the 1st string and then these two on a 7 and 8 and then 5/7 on the 4th and the 1st thing and then move it down a whole step so that’s half of it there and the rhythm is let’s try it together slowly and then we’re going to do these 8th notes walking down so that is 1 on the 5th string, 3 on the 1st string then you move it up to 3 and 6, 3 on the 5th, 6 on the 2d string, 1 in 4, this is just an octave on the 4th string and 2nd string and then this 6 which is basically on the 3rd fret on the 2nd string 3rd fret on the 4th string and then 5 and 5 on the adjacent strings, 4 and 3 so let’s try together slow it’s kind of got a real orchestral sound to it when I play these big open intervals it almost sounds like Bach or you know classical music so that was my approach for playing this interlude and then I Segway directly into the next section which is the bridge.

And that chord begins on an F over C which I play like this it’s like an E chord but just moved up one fret. Straight out of that orchestral part we head into the bridge let’s take a look at that section now so for the bridge we’ve got again some interesting chords happening here and I’ll show you the way I play it I begin on that F over C which is sort of you know of an E chord just moved up and then I go to a D minor 6 and the way you play that chord is just 5, 3, 4, 5, and this could play an A minor over D and then an A minor, then a C6 I just bring my pinky over like this then a G with a D in the base then an E flat diminished then goes back to G over D, then C minor 7, C sharp minor 7 flat 5 it’s the way I play this core it is I’m just that part’s just amazing to me because it’s the it’s the poorest or the refrain melody but it’s in a different key let me say segway right back into the verse so seamlessly so let me go over all those chords again here they are slow you so those last couple chords would basically be C to G over to D and then we’re back to the verse and we play a verse through and go to the chorus and it ends up basically just repeating those last four chords over and over G, D over F sharp, E minor, D over F-sharp.

I really hope this helps you learn the song and be sure if you want more information to click on the annotation on the screen or the iCard if you’re on mobile and you can check out one of my courses for guitar control I have a number of courses and there’s a lot of great material there so be sure to subscribe on our You Tube Channel and we’ll see you in our next video lessons, thanks for watching.

How To Play Blown Away By Carrie Underwood

Easily Learn To Play Let It Be By The Beatles