How to Play Boston More Than a Feeling On Guitar

Today, Guitar Control instructor Robert Baker, is going to show you how to play “Boston More Than a Feeling” on guitar. Robert is going to break down all the main riffs in this song. If you want to learn the solo he has made another video, how to play More Than a Feeling solo, so be sure to check that out! Robert mentions that today he will cover the main riffs but you can go even more in depth if you want, as there are lots of overdubs in this track. 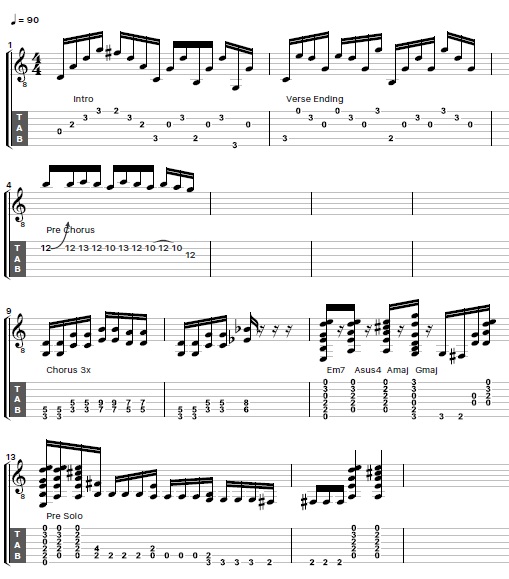 The first step to learning how to play “Boston More Than a Feeling” on guitar is starting out with the iconic Intro. Starting with two major open chords. D sus 4 and D major. If you don’t know how to play a D sus 4 chord, it is a D major chord slightly altered. The sus stands for suspended. We take out the 3rd of a chord and replace it with the 4th. In this case when we say 3rd and 4th we are referring to the degrees in the scale. If you don’t know how to play a D major I will explain that really quick and then explain which fingers are altered to play the D sus 4. To play a D major chord I make a peace sign with my pointer and middle finger on on my fretting hand. I place my middle finger on the 2nd fret 1st string and my pointer on the 2nd fret 3rd string, my middle finger falls on the string in between, holding down the 3rd fret 2nd string and you strum from the 4th string down, since it is an open “D” note. To play the D sus 4 chord all you do is remove your middle finger and change the note played on that string, the 1st string, to now be the 3rd fret 1st string played with your pinky finger, making your pinky and ring finger both in the same fret.

To play that intro he starts with the Dsus4 chord and then arpeggiated it. This means you hold a chord shape but pick individual strings in a pattern instead of strumming. In this case he picks 4th string to 3rd to 2nd to 1st, so straight down. Now pick up your pinky and place your middle finger down to move from the 4th degree to the 3rd, holding down the 2nd fret 1st string now with your middle finger, where it normally is for an open D major chord. Now pick the 1st string to the 2nd to the 3rd.

For this next transition he almost goes to a C add 9, very similar to it. So since you’re moving from the D major you are actually going to keep your 3rd finger down where it is. Having notes in common always makes chord changes easier and transitions smoother. Pick up all your other fingers and place only your middle finger down on the 5th string 3rd fret, holding down the C note on the 5th string. Your ring finger will actually stay down the whole time for this intro part since it is holding down the “D” note which is in all of these chords. For this almost C add 9 he picks the 5th string and then the 3rd then to the 2nd. Then remove your 2nd finger on the 5th string and replace it with your pointer finger on the same string 2nd fret and do the same picking, 5th string to 3rd to 2nd. Then place your third finger down on the 6th string 3rd fret holding down the G note and pick the 6th string to the 2nd. Then, repeat!

It repeats quite a few times and fades in. After this part, there is a transition from this part to the next. The transition starts out exactly the same as the intro with the D sus 4 to the D major and picked exactly as it was before. Now here’s the change. When we get to the shape that looks like a C add 9, when your middle finger is on the 5th string 3rd fret and your ring is on the 2nd string 3rd fret you pick 5th string, 1st, 2nd, 3rd, repeating the top part, 1st, 2nd, 3rd, with one extra pick on the 3rd fret high E, the 1st string. Then replace your middle finger that’s on the 3rd fret 5th string with your pointer on the 2nd fret 5th string, of course keeping your 3rd finger on the 2nd string and pick the 5th string, 3rd string and 2nd and back to the 3rd. Then keep your pinky down on the 3rd fret 1st string just like you do for the D sus 4, and pick the 1st string, 2nd and 3rd. Then he goes to the solo, see Roberts video, how to play More Than a Feeling solo.

On the fourth time through this riff, it starts out the same, first a G5, strum down down to a C5 strum down down. Now it changes and goes to a D#, the 5th string 8th fret with your pointer and ring finger or pinky on the 4th string 10th fret. This is such a cool transition and shows how smart they are and how thought out this song is, with every transition.

Step 4: The Riff Before The Solo

The last riff that Robert covers in this lesson is the riff right before the solo and after the 2nd chorus. So when they come out of the 2nd chorus there is a little break that changes. So after going through the chorus on the last time we still have that normal change that happens on the 4th time through that where after the G5 power chord to the C5 they go to a D#5. To an open E minor 7 to A sus 4 and back to A major. Here is where it changes. Instead of going to the open G, they go to a B minor chord rooted on the 5th string 2nd fret, you’re going to barre with your pointer from the 5th string 2nd fret all the way down to the 1st string, place your ring finger on the 4th string 4th fret, pinky right under your ring finger on the 3rd string 4th fret, and middle finger on the 2nd string 3rd fret. He palm mutes the chord and plays 4 eighth notes, so 1 and 2 and – then change to an A major, the same one we went over earlier, also palm muting and picking 4 eighth notes on beats three and four and – then change to a G major, same one we did earlier, the open G palm muted and playing 4 eighth notes, one and two and – to an F# note by itself. So just picking the F#, the 2nd fret 6th string. Ending with a single strum on the A sus 4 chord and a single strum on the A major chord. Taking us into the solo.

Recap: How To Play Boston More Than A Feeling On Guitar

I hope you enjoyed learning how to play “Boston More Than A Feeling” on guitar. Be sure and check out Robert’s separate solo video How to Play More than A Feeling solo to get an in depth breakdown of the solo. Remember to pay attention to details in these riffs as there are lots of slight variations and changes.

Easily Learn To Play Let It Be By The Beatles

How To Play More Than A Feeling Solo In this Guitar Control lesson instructor Robert Baker, is going to show you how to play “More