In today´s lesson I will teach a cool 12 Bar Blues Progression Bass Line
that any aspiring blusman MUST know, hope you like it! 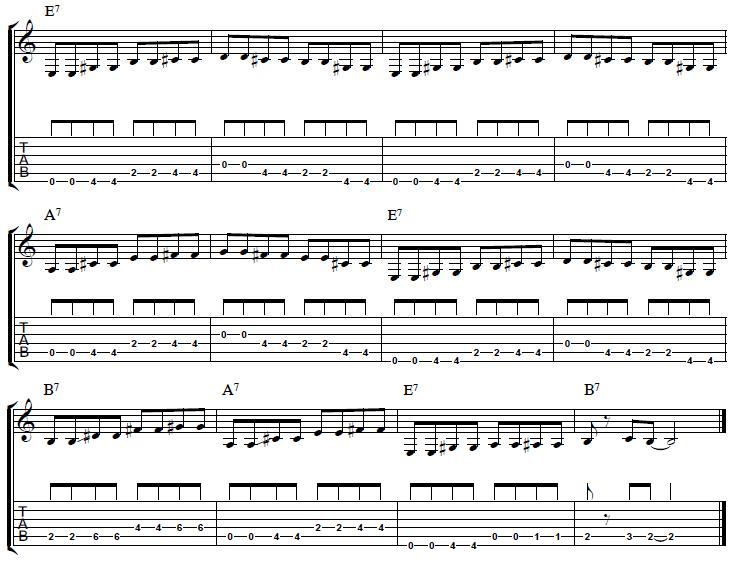 Hey, how’s it going, everybody?
My name is John McClennan [phonetic] and
I’m here today with Guitar Control, bringing
you this awesome lesson on the blues.

There’s lots of lessons out there where you
can learn to play the rhythm to the blues,
but one of the fun things to do that is often
overlooked is playing a bass line through the
blues, on guitar though. So what I’m playing
here is a typical line that a bass player in
a band would play, but now we’re transferring
that to guitar strings.

One of the things you might want to use this is if you’re
jamming with another guitar player and you’re playing some
rhythm stuff, it might be cool to break it up and just play
a bass line behind them. Also, it can be really cool just
to work on that right hand swing, too, as well. E chord.

All right. Well, thanks so much for watching and we’ll
see you in the next video.

Check out this Diatonic Exercise To Quickly Rule The Neck from Guitar Control instructor Darrin Goodman. Be sure to get the tabs to go along

Improve Your Technique With This Epic Sweeping Exercise

Improve Your Technique With This Epic Sweeping Arpeggios Exercise from Guitar Control instructor Darrin Goodman. Be sure to click on the link for the tabs