Here´s another short sample from `The Ultimate Acoustic Blues´,
which is coming out in October 16th!

Blues Guitar Lesson – Sweet Side of the Blues by Jimmy Dillon

All right, right now we’re going to go into a different style
of blues. This is one that’s near and dear to me. We’re
talking about the blues of more of a sweet side. Now, that
includes people like Mississippi John Hurt and there’s been
some modern players, too, that explore that side. What it
really, to me, means it’s finger-picking good is what I’m
trying to say.

This is something that is really a side of the blues that’s
maybe not quite as well known or well identified to the blues,
as sort of a… That’s more of a low down kind of dirty blues.
There ain’t nothing wrong with that. We’ve got plenty of that
going on here and that’s great and we will continue to explore
that. But I don’t want to leave out some of the more sweeter,
beautiful parts of the blues because the blues isn’t always
a sad, morose kind of thing. It’s really not.

John Lee Hooker once said the blues is the healer and I think
music is the healer. I think music heals things medicine can’t
and I think — that’s just why music is so loved around the world.
Acoustic blues is certainly a big part of that.

What I wanted to show on this is a couple of things. The right
hand and left hand are doing very different things. The left hand
is kind of doing a simple C pattern, trying to tell a little story
there, right? So you’ve got the C and the G as almost like a little
bass line. And then you’ve got my finger picking thing going on
down here, my sweet picking I’m calling it because it’s the sweeter
side of the blues. So you’ve got a steady rolling thing going here.
And then what I’ll do is I’ll pick-up a melody. My F to a G, back
to a C.

Now the songs that come to mind is “My Creole Belle” by John Hurt,
also… So I’m basically mixing a little Mississippi John Hurt with
a little Elizabeth Cotton, who was a wonderful picker. But picking
the blues, finger picking goes way forward, even go into a guy like
Keb Mo or Taj Mahal, all that kind of stuff. We’re going to touch
on Taj’s stuff because he’s just a master of the blues, still is,
a grand master of the blues.

To further take you into this, you can watch what my fingers are
doing and we’re going to tab this thing out. Just slow it down
and it really doesn’t matter what the melody is on top, you still
need that, what I call a dead thumb, thing going. We were talking
about some of the up and coming young bands like Mumford & Sons
and Avett Brothers and what they do with this sort of particular,
almost Appalachian flavor of the blues, or in this case, it’s
still Delta Blues, but in more of a folk main, I think.
And I just love it.

It’s really fun to sing along to, too, whether you’re singing
along with your melody, which is a great technique. 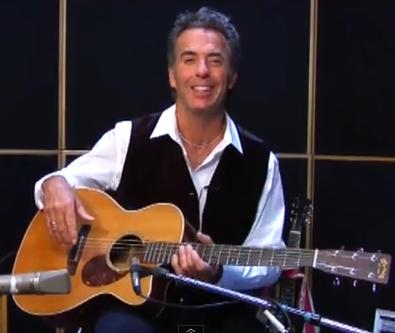