How To Play More Than A Feeling Solo

In this Guitar Control lesson instructor Robert Baker, is going to show you how to play “More Than a Feeling Solo” by Boston on guitar. This song is so good and a total Classic. If you do not know how to play this song but what to learn a bunch of the main riffs of this song be sure to check out Robert’s other lesson video, How To Play Boston More Than a Feeling, for a breakdown of all of the main rhythm guitar parts.

This Solo is extremely iconic and a lot of fun to play. It has tons of killer melodies that almost sound like vocal lines topped with killer bends and lead guitar techniques. Let’s break it down.

Step one having the mindset and attitude of making the guitar sing. This Solo is very vocal it is extremely melodic and very beautiful. So, we want to have the mindset of making the guitar sing and have a voice, meaning adding special touches like vibrato and just your feel and attitude as you approach this classic solo. You have the option in this solo to sometimes opt to do a slide instead of a bend. It sounds like they are bending but Robert explains that it’s up to you what you prefer the sound of and how you want to embellish the note.

Now, go to the 10th fret 2nd string and bend a whole step, both up and down bringing it back into a pull off to the 8th fret. Then bend the 13th fret on the 1st string with lots of vibrato. These are harmony notes which can sound a little bit dull on their own , but are very powerful when you add the other guitar.

Recap: How To Play More Than A Feeling Solo

I hope you enjoyed learning how to play “More Than a Feeling Solo” by Boston. It is such a fun solo, there are so many parts and ways to play the same notes, remember to always feel free to put your own spin on a solo, and use the technique that you prefer. Use these lessons and these songs learning on how to play things that you like and finding your own style and voice as a musician and guitarist. Pay lots of attention in this one seeing which techniques you prefer.

How to Play One of These Nights on Guitar: Eagles Song Lesson

John Mayer Waiting on the World to Change Guitar Solo

How to Play Money by Pink Floyd on Guitar 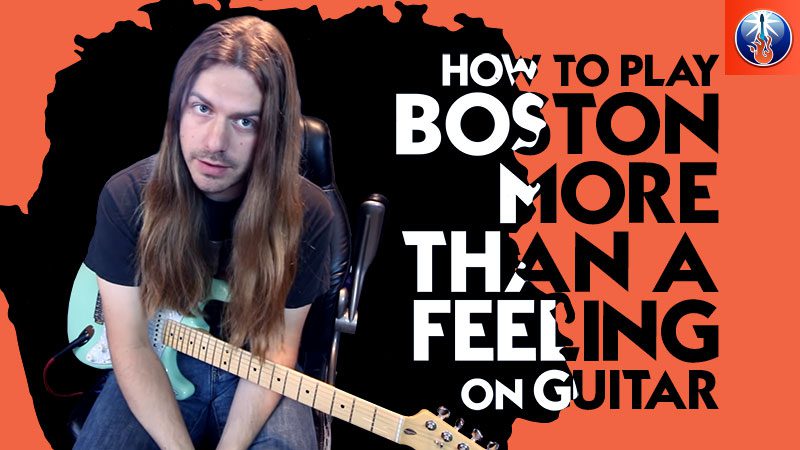 How to Play Boston More Than a Feeling On Guitar  Today, Guitar Control instructor Robert Baker, is going to show you how to play “Boston