Hey, how’s it going this is Jon McLennan with Guitar Control, hope you’re doing fantastic and today’s lesson is on a song called “Hey Baby” by Ted Nugent. It’s got a lot of riffs in it that I’m going to break down for you and its very blues based. 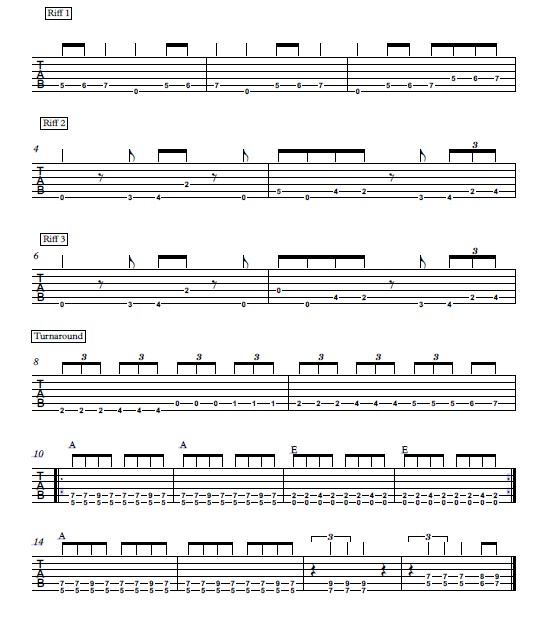 The first part, here’s the lead-in to this song and we’re basically kind of utilizing some chromatics here which means half steps. I’m going to start with my first finger on the 5th fret 5th string and I’m going to walk up every note 5, 6, 7, up to that E note and then after that I’m going to drop the octave playing the 6th string and that note is E as well both of these notes are E and that’s the first figure, so when you do it happens three times and then we sort of build on this idea of the chromaticism that is 5, 6, 7, on the 5th string and then 5, 6, 7, on the 4th string so that kind of loops in after the third time of playing that first little motif so here we go C then you restart and then you just go.

So what happened is I do this figure three times so that you’re considering that whole figure now is one then it would go again that would be three times and then on the fourth time and then we kick into the next riff. So all I did there was omitted so I just kind of do the first part of it so if I do the whole thing slowly it’s like this just a note in there let’s try to get here we go 1, 2, 3, you taking it out so that’s your intro there.

Let’s move on to the second one the next part of this is really just based off kind of a 12 bar blues and we’re going to play a few riffs one riff starting on E one riff starting on hang and then a turnaround kind of figure so let me show you and we’re going to go to A and that’s our turnaround so let me break it down for you so we’ve got the open E as our first note then I put my second finger on the 3rd fret 6th string and then I move up to the 4th fret then I drop my first finger down on the 4th string 2nd fret so I’ve skipped a string up to that, that’s our keynote actually up the octave and to 1 and 2 and 3 and 4 then I come back down the below E put my pinky on the 5th fret of the 5th string then I play open E 4th fret open E 4th fret, 2nd fret kind of palm those low E’s it’s just where my palm goes down here and just rests where the string and the saddle piece come together and then I’m going to go 3, 4, 2, more and that would be on the 6th string here three more and then 2 more on the fifth string.

As with a lot of rock and roll the guitar players job is just playing a riff and so we’re going to do this riff four times before we move on next riff goes to an A and what going to be is a 5th string open and then 3 4 on that string, 2 on the 3rd string open A 5th fret 4th string and then open A 4th fret 4th string and then 2nd fret 4th string so what you’ll notice this is an exact copy paste of the riff we were playing before just down one string, so in the context of it we’re going to be playing low E four times then low A then aim the riff on E 4 times the riff on A two times and then back to E again two times so it actually follows like a 12 bar blues if you’re familiar with that you know song form so let’s try. That was four times and then we go to a twice this time when we’re going back to E instead of playing this we actually go down to the E part once we so that would be back down to three more two more and then you let me show you that transition then we go back to that E basically two times now the next section where we’re at now is to turn around and that’s sorry basically just as big climb up in triplets to triplet meaning three per note so three per beat really but there’s three plucks on each note you’ll see two, two, two, four, four, four, one, two, more five, and then the last one we end with 8th notes so it’s like if you want back to the low E so you can replace that 7 with a low E.

Let’s talk a little bit about soloing, next up is the solo section it sounds like this. What I basically transitioned into. I walk-up zero, two, three, four, and then I arrived at the 5th fret which is the note A and I plant down this A five you know 5th fret and then 7th fret and that’s sort of a classic rock shape and then we’re doing this rhythm and blues thing which is really like a room 5th 6th kind of movement and what I’m basically doing down on five and seven then my pinky goes down to the 9th fret just play it for one strum there and then take it back off so it’s one and it goes on beats two and four so then I move down to the one chord E and I do that same sort of rhythmic figure open E 2nd fret 1 this time putting the third finger down to grab the 4th fret so we get 8 bars of that basically alternating two bars of a two bars of E sounds like this then we go back up to the four chord  and we go to measures of that we do these hits and that’s basically taking that a which was five and seven jumping it up two frets two seven nine and going one. Let’s see they’re basically triplets got three four and then take it up to the 10th fret same thing tap that back and then you go up which would be 11, 12 so I’m just counting where my first finger is back up to the e so let’s play that whole section that’s basically the rhythm that’s going on behind the solo so what I did was just play in that rhythm track just to kind of a loop pedal and we can talk a little bit about soloing over it so and I’ll try and break down you know the approach that I hear on the recording so here’s my rhythm you know so really you know most of the sound on the recording is like A minor pentatonic which could be played like this at the 12th fret 12, 15, 12, 14, 12, 14, 14, 12, 15, 12, 15, it’s kind of the rock scale you know and so you can kind of play any one of those notes over this chord progression and you’re going to be a bluesy or sound you’ll hear so I’m just kind of noodling around with a solo but the basic idea there is pretty much all of that was a pentatonic scale a couple licks that just kind of came out right now this is a good one bending the 14th fret on the 3rd string and then putting your first finger down and playing 12:12 on the next two string and you’ll hear that kind of thing like whether it’s ringing over or you’ll hear kind of playing them separate which I like and that’s basically just a repetitive figure and then a good way to get out of it it’s just a band you could bend on the 15th fret or the 1st string 15th fret so that would be kind of my approach to playing over those changes.

I hope this lesson helps you out and inspires you to keep playing for more information you can click on the annotation on your screen or the I card if you’re on mobile and you can check out one of the DVD courses online from guitar control. Make sure to subscribe on our You Tube Channel and we’ll see you in our next video lessons, thanks for watching.

How to Play Same Old Song and Dance by Aerosmith

How to Play Satisfaction by The Rolling Stones