Tablature, referred by most as TAB, is a method of musical notation used by people who play stringed instruments. Using the TAB method, a song is represented in notation using lines to indicate strings and numbers to represent the fret numbers to be played. Many popular songs have been “tabbed” out for guitar players of all levels and making it possible for guitarists to play their favorite songs.

Easy acoustic guitar tabs are ideal for beginning guitar players, particularly those who struggle with maintaining an interest in staying with practice long enough to become a more proficient player. Learning to play these songs can give beginning players a sense of accomplishment and a feeling that they are progressing. At the same time, playing songs can be beneficial to any player starting out because it forces them to try to replicate their favorite songs, thereby forcing them to work on the skills needed to improve their playing.

Easy acoustic guitar tabs are usually very simplified versions of more complex songs. In many cases they include only lyrics and the chords that accompany those lyrics, giving the player just enough information to make the song recognizable when played with the appropriate rhythm. As a player’s skill level progresses, he can expand on a simplified tab by adding some of the more complex elements of the song using his ear or by seeking out more advanced tab of the same song.

Below is an example of the chords used in a twelve-bar blues progression. This example only illustrates the chords used in each bar. It says nothing about the rhythm to be played. This tab is used primarily as an illustration for the chords. A guitarist could, however, improvise a rhythmic structure from this simply by playing the assigned chord of each measure and creating his own rhythmic interpretation.

Here is the introduction to “Stairway to Heaven” by Led Zeppelin. Notice the melody has been set out in tablature and the chords, the melody is built around are set out above the tab. This particular example also makes use of the note tails to give the player more information about how the intro is to be played.

Easy acoustic guitar tabs don’t necessarily need to be song. Guitar scales, chord shapes, and written exercises are all available in simplified tab form and are ideal for players who want to improve their playing without knowing standard notation. The availability of easy guitar tablature on the internet and in books has made it much easier for guitar players of all levels to gain access to written music, whether it be popular songs or exercises, and to use that tablature for self-improvement.

How To Play Weak By Skunk Anansie On Guitar 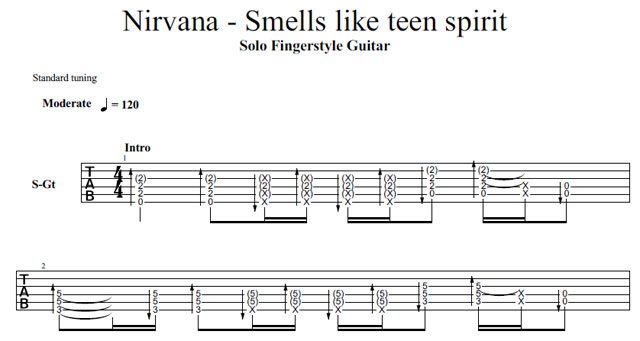 What You Need to Know About Acoustic Guitar Tabs

Guitar TAB, or tablature, is a godsend to those guitar players who can’t read standard notation or who have no desire to learn how to