Hey, how’s it going this is Jon McLennan with Guitar Control, I’m bringing you this video lesson on a classic tune by Bob Seger called “Night Moves”. It’s a great acoustic strumming song and I’m going to show you some funky chord voicing with a capo on the 1st fret. We’re going to zoom in and break it down the whole song, the verse, the chorus, the bridge and the ending, so let’s get rocking. 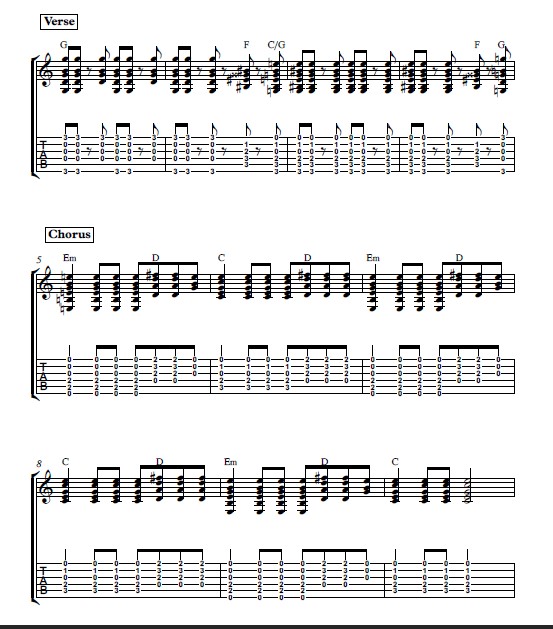 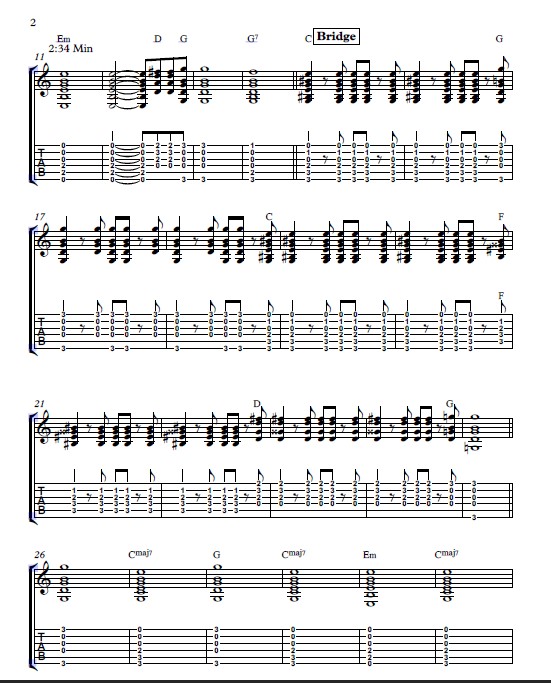 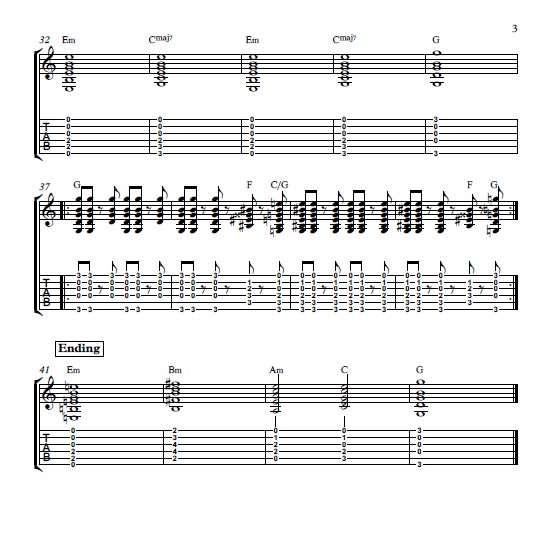 For this main groove, I’ve got a couple of chords I’ve got a G shape, an F, and a C over G and these might not be the way that you traditionally play those chords but if you follow me on this song. I’m going to make it easy for you to transition, so I’m starting on that G and the way I play it is my third finger on the 3rd fret 6th string and then that arcs over to mute the 5th string and then I’ve got the next three strings open and my pinky on the 1st string.

The first measure starts with my hands always going back and forth and I do this little rest in there one and two and one and three and two and four and sometimes they sneak through. There are more prevalent like flowing with it, like that in the groove and then I move to an F chord and what’s written on the chart you know the tab is F over C which is kind of taking an F chord and playing the middle notes of it which would be three to one and in case you haven’t noticed I am playing with the capo on the 1st fret so my chords are bumped up one fret so really it’s like we’re playing G shapes the concert is A flat you know it’s everything up a half-step but just start simple you know think G and have for an out and then the thing that’s cool about me playing this for an F is the next chord is C over G and look at how easy that transition is from an F over C to a C over G all I do is bring those fingers up one string and this is a great C chord because I can play all six strings on this sequel typically when you play a C you know you don’t want to play the low E so it’d be just for one strum, one upstroke on that F and then I’m on C and then you do the exact opposite go back to the F, F, F, go to G, so it kind of goes backwards so G, F, C, C, F, G.

That’s the 1st section, then we’re going to head into the chorus we’re going to transition over to an E minor chord so couple things you can play the E minor like this the way most people do to a three. I do it kind of weird, I do it with one finger it’s just something that I picked up from a guy named Tommy Emmanuel but here is how I play the E minor just so you know if you’re falling and it looks weird but yeah so I’m going to go one, two, and three, and I’m going to switch to that D at the end of three, so beyond that upstroke and then I can kind of just play these open strings then I go to the C so that’s always nice whenever you can like kind of play open strings between the chords it’s a cool sound and then I go to a C chord in the second measure after 1 and 2 and 3 and 4 back to that D, E minor, that basically goes twice so those 4 bars are this 1st four bars of the chorus then you do the same thing with the E minor you just stay on the C and then you’re back to the 1st section which would be that’s how you play the course so one more time just with the whole chorus here it goes 1, 2, 3, 4, next up is the bridge cool so right now we’re at about two minutes and 34 seconds into the song and we come out of that chorus and we hit an E minor chord and it’s just 1, 2, 3, I kind of think of this as like a little channel, a little transition and then that lands us right on the bridge and then we’re into the breakdown section.

So what I did there at the 1st 4 bars transition, that was a D2, 3, 4 and then a G7 which we play that is three, one, and then you go to a C chord I’ll probably do the C / G now coming out to an air okay so let’s see that whole thing together here we go one two three to the bridge and notice that kind of transitioning between the chords happening on the end of four so you know kind of anticipating the chords now we’re going to look at a breakdown part and how to take it out so now we’re at what I would call a breakdown and this is just acoustic guitar and vocal and it’s just sort of a whole note approach going for 7 major 7, 0, 7, and then we kick and do back to back to our 1st part again and that repeats over and over until the very end and the way you end the tune is you know you’re working on the nine moves and this goes and on the cheese, so those chords for the end were minor C .

I hope this kick starts you’re playing and gets you inspired to keep practicing for more information you can click on the annotation on your screen or the iCard if you’re on mobile and check out one of the DVD courses at guitar control.com. Make sure to subscribe on our You Tube Channel and we’ll see you in our next video lessons, thanks for watching.

How to Use Melodic Phrases To Make Creative Improvisations

How To Enliven Your Guitar Playing With These Strumming Patterns

How To Do These Super Simple Fingerpicking Arpeggio Patterns

How To Use Double Stops To Improve Your Lead Guitar Playing

How to Do Arpeggio Lick with Tapping and String Skipping

How To Play Smooth Sweeping Arpeggios On Lead Guitar

How to Play This Legato Lick and Build Your Guitar Chops

How to Create Blues Guitar Solos with Pentatonic Scale

How To Do This Easy Guitar Strum In Tom Petty Style

Learn How to Play a Cool and Easy Blues Guitar Lick

How to Play `Man in the Mirror´ by Michael Jackson

How to Play a “Must-Know” Slide Blues Guitar Lick

Right Chords To Use On A Standard Tuning Guitar

How to Get the Most Out of your Pentatonic Licks

Guitar Tips On How To Build Playing Speed

How to Play Fire by Jimi Hendrix on Guitar

Easiest Guitar Chords in the World!

How to Slap on the Guitar – Part I

Guitar songs are song that celebrate the guitar, songs that put the guitar at the forefront of the mix, songs that make you want to