Hey, how’s it going this is Darrin Goodman from Guitar Control, bringing you this video lesson today we’re going to look at a song called “No One” by Alicia Keys. This song is originally mainly just on the piano but I’ve made an arrangement for fender style acoustic guitar. It’s pretty simple to play and it sounds really cool so for this one we will be using a capo on the 4th fret. 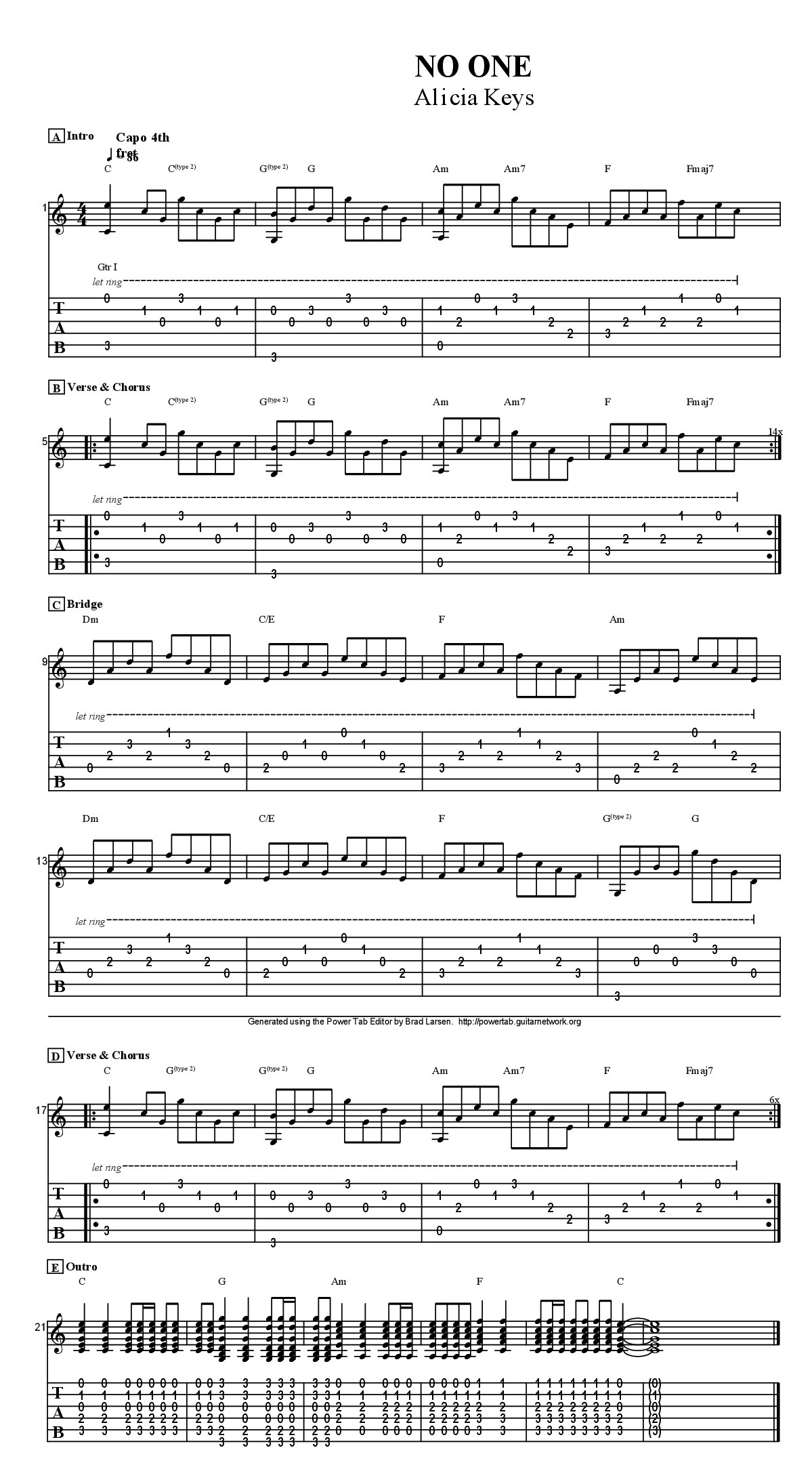 So starting off, this song uses a lot of just basic chords that you know hopefully you already know was just you know a couple little slight variations and stuff and we’ll go through that as we go along so we start off where is  have your regular old C chord. We’re going to pick the 5th and the 1st strings at the same time and that’s beat number one and then from there it goes into 8th notes, so we’ve got one, two, three, and four. So we’ve got the C five and one simultaneously one and then we go to strings 2-3 and then we go to the 1st string but we’re going to pick up the 3rd fret of the 1st string with our fourth finger three and four. So one, two, three, and four, and then we go to a G, but the G that were going to use is the one we’re your 2nd string isn’t open but it does have that note sometimes.

So when we make this transition you just switch to G or either you don’t put your third finger down or you could leave your third and fourth finger off. For the time being we hit six and two at the same time but the 2nd string is open, so we got six and two then to the 3rd string and then we’re going put those two fingers down your third finger down on the 3rd fret of the 2nd string and your fourth finger down onto the 3rd fret of the 1st string, so starting on the G that’s the first two measures to A minor so we’re going to hit five and two at the same time and we’re going to do a minor 7 so we pick up the 3rd fret of the 1st string with our fourth finger to F and now we go for three, two, three, one, three, and then we’re going to lift our first finger we’re the first string is open so it’s like F major 7 so that is like the little intro and then from there we go into the verse and the chorus which is actually the same thing as that we just played so the verse in the chorus is the same so when you’re starting at measure 5, the second staff it’s 4 measures long and it’s repeated 14 times so the song has quite a bit of just repetition in it and stuff so this is a you know a great song to you know to try to sing along with and you could move the capo you know either up or down to kind of match where it’s comfortable for you to sing so that whole verse and chorus section and then it just simply repeats like I said it repeats a total of 14 times.

After you’ve repeated it 14 times then it goes into a bridge section, so the first quarter in this bridge section is D minor, again it’s still an 8th note feel so we have 4-3-2-3-1-2-3-4, and then from there we go to C over E, so what you’re going to do is you’re going to leave your first finger your first finger to move from the 1st string to the 2nd string 1st fret, 3rd string open and 2nd fret of the 4th string so those two measures start on D minor to C over F to A minor and back to D minor again C over F to G.

So when we go to that G we first go on to the 2nd string again needs to be open so we’re doing G we’re just removing the third finger 6-3-2-3, and then I’m going to put my third finger back on one, two, three, four, and from there it goes into another section of verses and choruses again same as before so starting on C and that repeats a total of six times this time and then from there we go into an outro where there actually is it’s still piano but you can actually hear an acoustic guitar in the background.

I hope you enjoyed that and you got something out of it if you liked the video leave me a thumbs up and be sure to subscribe on our You Tube Channel and we’ll see you in our next video lessons, thanks for watching.