Guitar chords are the foundation of guitar playing Whether you aspire to be a lead guitarist or a rhythm guitarist, you’ll want to have a large vocabulary of chords at your disposal so you’re ready to play in any given situation. In this guitar lesson for beginner guitar players I want to give you the information you’ll need to build a chord vocabulary you can turn to any time you need to find just the right chord in any situation. Just about everybody understands the value of learning chord shapes. These are chords you memorize just so you can play them at a moments notice, without thinking about the notes that make up the chord. Here are some chord shapes for the open position chords in the first position that every beginning guitar player should know. These are chords you should practice and commit to memory. 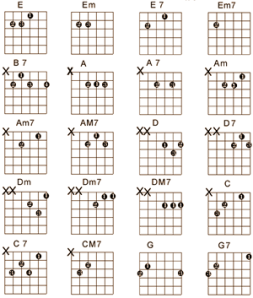 The next type of chord shape you should work on is the barre chord. Barre chords are based on open chord shapes but re-fingered so you can place your first finger across the neck of the guitar as a barre. This allows you to move the chord over the neck of the chord and change chord names without changing the shape you’re playing. The name of the chord is determined by the root (the lowest or first note) of the barre chord. The numbers to the left of the diagram indicated fret numbers. Once you’ve memorized the open position chords and the barre chord shapes based on these chords, you’re well on your way to creating a chord dictionary in your head. 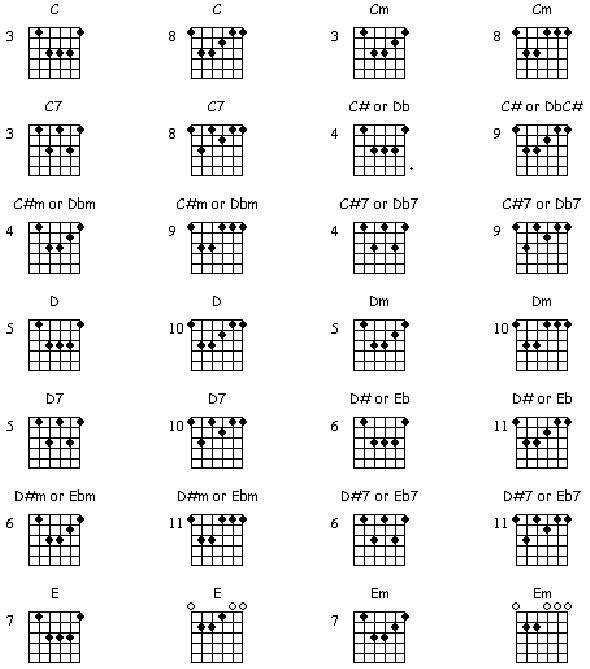 This guitar lesson for beginner guitar players has focused so far on memorizing chords, but unless you can memorize every chord in every position, you’ll still be limited in the chords you’re able to play. This is where learning how to construct chords comes in handy. If you know the notes of the scale that comprise a given chord, you’ll be able to build any chord anywhere on the neck of the guitar simply by finding those notes and playing them together. This is a more advance study, and one you won’t undertake immediately, but the here are the basics. A major scale uses the first, third, and fifth notes of the corresponding major scale. For instance, the key of C is C-D-E-F-G-A-B. The first, third, and fifth notes of this scale are C,E, and G. Those are the notes you need to build a C major chord. Minor chords are built the same way, except the third note is flatted to make it minor. The C minor chord, then, would have a C, Eb, and G. Other chords are built adding or subtracting notes from this triad (three note chord). Add the seventh note of the scale, for example, and you get a C7 chord. Take out the third note and add the fourth and you get a Csus4. As I said, chord construction may not be something you jump into right away, but later on, after you’ve gotten more comfortable with playing the chord shapes you memorize, learning to build chords anywhere on the guitar will open up a myriad of possibilities.