Hey, how’s it going this is Darrin Goodman with Guitar Control. I’m going to show you how to play “Wildfire” by Michael Martin Murphy. This is a great song as far as if you want to pick apart a song and study. If you’re an aspiring songwriter, this is a great song the way the chords are put it together are just really cool and awesome and it’s got some cool one chord in particular that’s kind of interesting. 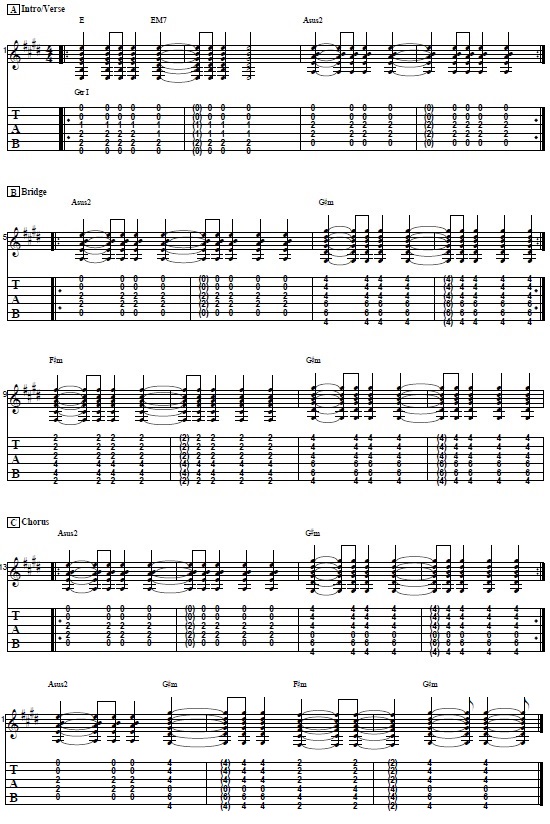 So you’re on the 4th and 3rd string for these first two measures of the Intro and this is also the same thing as the verse it’s just repeated, so moving our third and fourth finger back to the 5th and 4th string we start off we have the E then strum. Kind of get into that groove, make it your own or just feel the rhythm. So we’re on the E and then we’re going to take the fourth finger off to go to the E major 7, so it’s the same strum it’s just that the ending of it rings out longer on the E major 7, than it does on the E.

We’re on the E then we switch to the A suspended 2, we just move our third and fourth finger up and that’s the first two measures and then it repeats. I think it goes through the intro like you repeat it twice through the intro and then two more times through the verse, I mean when you listen to the song you’ll you know you’ll be able to tell and from there it goes into a bridge section.

So you play those two parts twice, starting on A suspended 2, G sharp minor, back to A suspended 2, G sharp minor, then it goes from there to F sharp minor. So you simply take this barre chord and you’re going to move it down a whole step, so we’re barring across the 2nd fret, and our third and fourth finger are fretting the 4th fret same strum, back to the G sharp minor and from there it goes back into another verse. But actually it goes back to the intro again, because during intro there’s some other instrument playing a little melody. So if we go from the verse to the bridge, F sharp minor back to G sharp minor, then back to the Intro. Getting used to doing that E to E major 7, I found to be the most difficult is when you’re going from G sharp minor and then you have to go back and grab that chords.

You want to develop some muscle memory of putting your fingers down to the right chord shape to make that transition. In a case like that I would give it a strum, lift my fingers up, try to hold that shape and lift my fingers up, about a half inch. Set them back down, give a strum each time you want to give this strum because your ear will tell you if you’re doing it right or wrong and try to build up that tour you can play where you can grab that chord very easily without having any delay.

Then the last part we need to go over is the chorus it starts off with A suspended 2 and goes to G sharp minor, so it’s somewhat similar to how the bridge was sort of A suspended 2, G sharp minor as repeats. That’s the first four measures of the chorus and then goes to back to A suspended 2, but this is where the chord changes and become a little trickier, as far as they change that.

So the whole chorus goes right back in and goes right back into that intro, verse. Now you have all the parts of the song. I hope you enjoyed that and you got something out of it like I said that in the beginning that some of the chords stuff and this is just the way the song is written and put together. Make sure to subscribe on our You Tube Channel and we’ll see you in our next video lessons, thanks for watching.