How To Learn Guitar Scales The Easy Way

Scales are the foundation of music. You create melodies and harmonies from them. When we first get start playing guitar, the last thing on our minds is which guitar scales to learn. We’re more likely thinking about which of our favorite songs we can play first. There’s no reason you can’t do both. In fact, playing your favorite songs while you’re learning scales is one of the ways I recommend breaking up the sometimes monotonous routine of practicing scales on guitar. Check out this VIDEO GUITAR LESSON ON SCALES If you do the math, there are hundreds of possible scales available for you to learn, and if you want to spend your studying instead of playing, dive right in and I’ll see you in a few years or so. If what you want to do is play guitar, let me simplify things a little bit. You need to know the major scale and its relative minor, which can be found by starting on the sixth note of any major scale and playing through to the octave. All of the other scales you’ll ever need (and there will be a few, depending on the type of music you play) can be derived from these scales.

I’ll simplify it a little further. You don’t need to memorize the notes of each of these scales. There are no guitar scales to learn, in other words. You need to learn the scale formulas that will allow you to build these two scales, or any other scale, in any key just by knowing the root of the scale (your starting note). See below for the step patterns for the major and minor scales. Note that these two scales have the same notes in them but have different roots (starting notes), which gives them a different step pattern and a different key center. 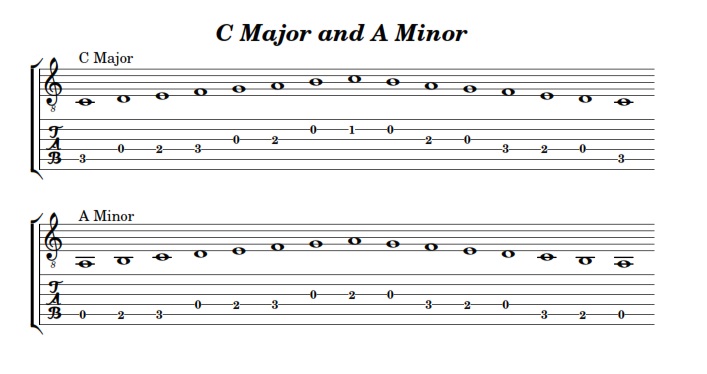 Now, say you want a blues scale, which is one of the guitar scales to learn for any guitarist who wants to play rock, country, rockabilly, the blues, etc. The notes of the blues scale in C are C-Eb-F-Gb-G-Bb-C. The step pattern is W+H-W-H-H-W+H-W. This pattern of steps can be applied to any major key to get the blues scale. You can also think of a blues scale as a major without the second or sixth degrees of the scale and with a diminished (flatted) fifth. A guitarist could devote his life to the study of scales and get lost in it. I don’t want to discourage anyone from pursuing a deeper understanding of scales and their importance in music, but I want you to know there’s an easier way to approach them. If playing lead guitar is your goal, I recommend you to check out our: BEST SELLING LEAD GUITAR COURSE

How to Play Diminished Scale on Guitar | Easy to Follow Video

Rockabilly rhythm pattern from the King