How to Play The Rockabilly Guitar Pattern 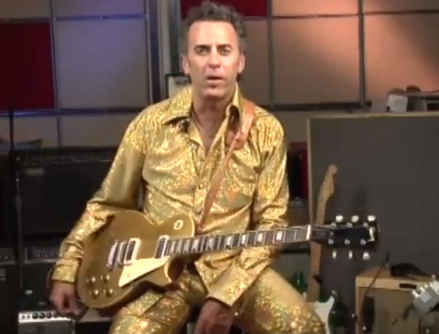 We went from kind of the purple blues to the bright gold of full-fledged, full-flight rock and roll here. This is a really fun piece. I actually get to play Elvis in Ascension of the Blues in one of the productions and that was really fun. It’s funny how you put on an outfit, you put on a gold guitar and you’re off to the races; get all excited. I want to tell you a little bit about what I was doing. That was kind of a two-beat, what we call a two-beat in the key of A. It had a little slap on it and here’s what basically the target notes I was doing. So that’s just a little — you can follow the tab on that, but it’s just a little A riff. Then you just go to your D string; back to A. Then you go to your E. Now, I should mention, again, we keep coming back to this because these are basics with this kind of stuff. I was using my right hand to dampen the strings to get that tight. You won’t get that if you hit it open. It doesn’t have that same attitude. So that’s that old rock and roll thing. One of the key licks I do in this is this. Now that’s kind of a little Scotty Moore. He was a guitar player for many great rock performers back in the early days of rockabilly in Memphis and that area of the world. Basically what you’re doing is just a two-string… We have approached that in many different ways. So you apply that at the I, the IV and the V chord and you’re home.

Rockabilly rhythm pattern from the King