How to Play Easy Funk Sound on Electric Guitar

I’ve got a tasty lesson for you today from Jimmy Dillon. We are gearing up for his latest, greatest publication – Eclectic Electric II. Yes, II as in “2”… This will be the 6th Jimmy Dillon course. We keep filming him because he really keeps on delivering the goodies. Today’s lesson is no exception. Check it out: 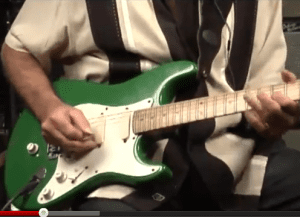 Okay, that was obviously a cool little funk thing in A minor. I went a couple of different places with that. I started out with sort of a James Brown, Wah Wah Watson kind of thing. That had not quite as much distortion on it, more of a rhythm sound. So this is kind of like a minor 6th chord, very easy to do. All you’ve got to do is just lay your 1st finger here and then move your pinkie here, or your 3rd finger if you choose. I like doing the pinkie because it allows me to use my other fingers along the way. That’s just a way of coloring the A minor. Now, what I did is I played a melody, I went… A very simple, minor lick there. Once again, we always talk about the root. If you want to play it safe and you’re just learning a song or you just want to know that some thing’s going to work, if you’re in the key of A minor, play that A. We’ve done this over and over again and I keep trying to hammer it home. If you start with the root note you can never go wrong. So that’s a rule you can live by. In this case we’re playing A minor, a very simple, I IV sharp V progression. So if you know you’re in A minor, why not start with the high A and then just do a descending line? You’re probably familiar with that. You’ve heard that lick before. I could probably name 10 songs that utilize that lick. Bob Marley, “I Shot the Sheriff” uses that type of lick. This is a trick that I want to share with you, too. Sometimes if I’m at a loss of what to play I’ll just try and search-out a very simple melody, especially over a groove like this, rather than getting tricky with it or trying to get something fancy — and we all do this, believe me. Every guitar player I know does this. We’ll be playing somewhere and we want to try and do something fancy, but the truth is, if you want to be effective and really nail it, you’re better off doing a really simple lick. Even if you’re just a beginner, this is still something you can groove on and really have fun with. My lick, again, was just… Now, when I went to the D chord, that’s the IV of the A minor progression, it takes you from your D chord, your D minor, and then you do that lick right back to your A. So you’re back to your root again. Okay? Now, the next part is a little bit tricky. What I did was a sharp 5, which is an F and then I went to an E. And back to the 1. Now the reason I did that, I like — I have a great affinity for sharp 5 chords in a minor progression. And don’t let that scare you; it’s not complicated. If you can count one, two, three, four, five, you know that your one is your A minor, your four is your D minor and your five is your E minor. So a sharp five would be your F. In this case, you can check out my F7th. Now, we’ve talked a lot about partials along the way here. This is another partial. You don’t have to hit a whole chord all the time, especially if you’re playing with a band. This triad will suffice. That’s a nifty little chord to have in your arsenal. And then simply go down a half step. And the bonus is, you get to pick-up the low E.

Funk Guitar Lesson – How to Get Funky on Acoustic Guitar

How To Play Get Lucky By Daft Punk