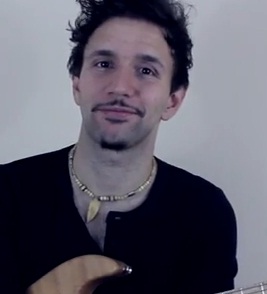 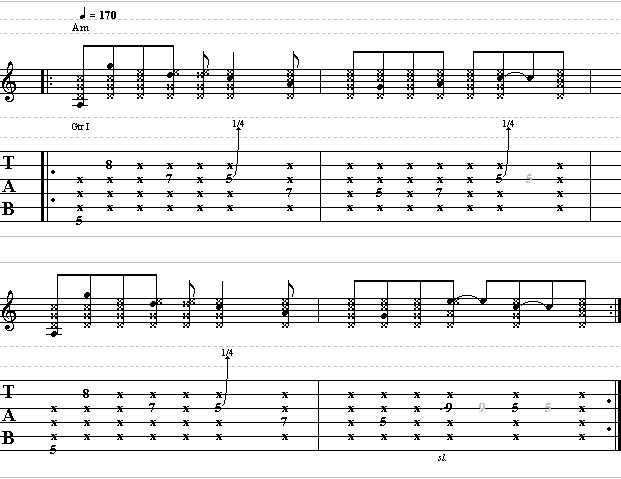 Hey, everybody. This is George Meyers on behalf of Guitar Control. I do hope that you enjoy this lick and you will find the transcription on the link under the video. Let’s check it out. This is a really, really cool lick and its fairly challenging because it is expanded all over the strings set. Its really important that you have nailed your muting technique before tackling things like that. Really, a simple way to go about it is to start by picking a scale and try playing this scale accenting every note by doing quite wide motions and making sure you’re not hearing any other noise but the one out of the scale. Because what you have to think about, funk music is very expressive and it’s all about the groove. So you cannot be too careful. You want to be able to play freely without having any noise in between notes. So let me explain the riff. We’re going to start on A on the 5th fret of the low E string. I’ll start it with a downstroke. Then what I’m doing is I’m playing G on the 8th fret of the B string. As you can see it’s quite a big leap, with an upstroke. Then heading over to the D on the G string; and C on the G string; and A on the B string; then G on the D string. Then A on the D string; back to C on the G string. So we’ve got that little melody going on. This is the first part. The second part starts on A again. We head to G on the B string; then D on the G string; then C on the G string; and A on the D string; then G on the D string; and then we do a really cool slide. So what we’re going to do is we’re going to start on D on the G string, slide to E on the G string, so D is heard very, very briefly. It’s got to be quite a rapid slide. Then end on C on the G string. Now, I’ve seen quite a lot of people play funk music and a lot of the times you can see people performing and trying to be a bit too careful. I mean, funk music is all about fun and dancing, so I quite like sometimes when it’s not actually 100% clean, when you can get a bit of the noise and a bit of the grittiness, but its all about attitude. So when you practice that kind of music you’ve got to really mean it because the way you’re going to practice it is going to reflect the way you’re going to perform it at a gig or even with your friends or whatever. I hope you enjoyed that. See you soon.

Cool Funky Groove Riff in A7