Guitar Control founder and instructor Claude Johnson demonstrates a Funky Rhythm Pattern with James Brown Chord. You can’t think of Funk and not think of James Brown and with the step-by-step video instruction and the included free guitar tabs you will be getting your funk on in record time. 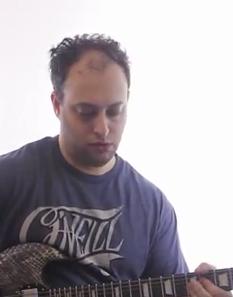 Hey Claude Johnson here with GuitarControl.com and I got a pretty easy Easy Funky Rhythm Guitar Lesson in the Style of James Brown lesson for you. Right now in fact we’re just dealing with one chord; I call it the James Brown chord.

Let me show you the shape of this funky chord first. So this particular one would be called D9; first finger on the fourth fret of the D string and then my ring finger is going to bar the top three strings, so just serving those top four. So I’ll go over the name why it’s called a D9 in a second. But so what I’m really doing is sliding up, I’m starting the whole shape down one fret and sliding up and then the basic strum that I’m using, which you know I don’t know where I came up with this, its pretty much listening to James Brown songs and kind of feeling it out, it’s kinda like so… Then I go back to my half step below, pretty simple, works great and there’s a lot more stuff you can do with that, in fact I was just looking at one of our other teachers here at Guitar Control, Matt Hewlett, he has some incredible lessons on funky minor chords and stuff. You should check that out, I’ll put that link also in the video description; so you can either go have a choice what you choose to click on. You can get the tabs for this and other tabs you can also check out Matt Hewlett as well. So anyway why is this called a D9, so it’s basically a rootless chord. So it’s a very beautiful chord as well for, jazz and blues, but when we take away the root just gets a little lighter. It may be seem better with a mix if there’s a big band or keywords or with a bass player, that could be very cool too. So really it’s like root, which we’re not gonna play, and then third, seventh, ninth and fifth. Now interestingly enough this chord is also like an F minor 7 flat 5 and it’s also an A minor 6. So I did another video a couple weeks ago on all of those different chords with the same shape, but different chords, anyway not going to complicate it, for right now just wanted to show you that rhythm, hopefully you’ll have fun with it. So again check out the tabs. If you want to check out my DVDs Killer Guitar Control Secrets go to GuitarControl.com/secrets. Thanks for watching Easy Funky Rhythm Guitar Lesson in the Style of James Brown, talk to you soon.

Funk Guitar Lesson – How to Get Funky on Acoustic Guitar

How To Play Get Lucky By Daft Punk