How to Play The 4 Beginner Guitar Scales

The most important thing a lead guitarist can have in his or her toolbox is a keen understanding of guitar scales. If you understand how scales are put together and how they fit into one another, you can move up and down your guitar’s fretboard effortlessly. There are four beginner guitar scales that every guitar player should have firmly under his or her fingers.

Minor Pentatonic
The minor pentatonic is probably the first scale that most people learn. There are several other positions with roots starting on different strings, but this particular position is intuitive because it begins on the low E strong and is an easy grip. Your fingers don’t have to move very much, and you’re almost always in a great location for string bending.

A lot of guitar players learn the pentatonic scale and never learn another. For some people, it works, but for most people, if they’re stuck inside the pentatonic scale, their melodies get stale and lack sophistication. Be sure to learn this scale but don’t depend on it. 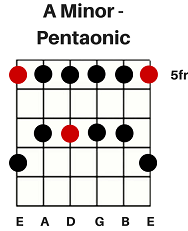 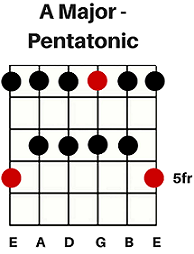 Blues Scale
The blues scale is a natural extension of the minor pentatonic. It adds one extra note that gives it a bluesy flavor. This scale is a favorite for blues and jazz musicians, but remember that this is just one position. Make sure you have this one before moving on to the others. 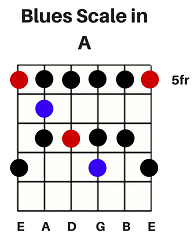 Major Scale
The major scale (also known as the Ionian mode) is the most common scale for the western ear. All of western music theory is built on this scale. To put it plainly, this is the most important scale you’ll ever learn. This scale is a little more difficult than the pentatonic or blues scales, so take your time learning it.

Make sure you have this scale under your fingers and you’re hearing the differences between the notes. Knowing the root note when you hear it is fundamental to everything you’ll learn in your guitar playing journey.

When you’re finished learning these scales, try your hand at the minor scale (also known as the Aeolian mode). It takes a bit more stretching in your fingers, so make sure that you’re completely comfortable with the pentatonic and the major scale before you move on.

I also recommend you to check out our best seller course in DVD:

Harmonic Minor Extended Scale Shapes – What You Need To Know

How to Learn and Master Guitar Chords and Harmony

Guitar Scales – Things You Need to Know As Beginner

How To Play A Blues Guitar Scale With Easy Tabs

Learn How to Play The Minor Scale On Guitar

Types Of Guitar Scales You Need To Know

How to Read Guitar Scales