Guitar Scales – Things You Need to Know As Beginner

Hello guitar fans! Darrin Goodman here from GuitarControl.com bringing you another little guitar lesson today. When I was starting out and first learning scales I just learned the pattern, but did not understand what it meant. To fully utilize them you need to have guitar scales explained so you understand what they really are.

Basically Guitar Scales are a musical scale is just the sequence of notes in a “musical key”. There are 12 keys all together and each key has 7 notes. For example the key of “C” has the notes C, D, E, F, G, A, and B, all naturals with no sharps or flats. Each key is identified by the number of sharps or flats it contains and can be easily figured out with the use of tools such as the “Circle of Fifths”. 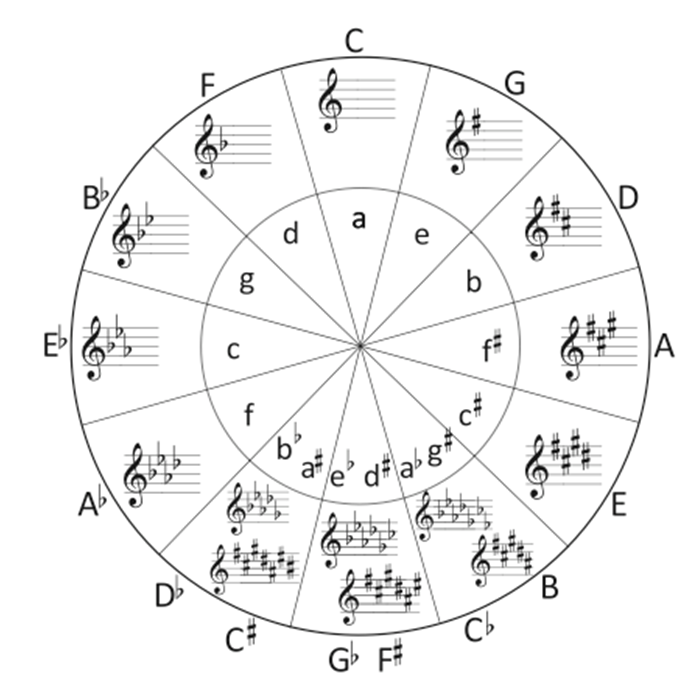 The key of C is the top center key and shows that it has no sharps or flats. Note that the uppercase letters on the outer side are the “major keys” and the lower case in the center is the “relative minor keys”. By moving clockwise you move in intervals of fifths and counterclockwise you move in intervals of fourths. By moving to the first space clockwise you have the key of “G”, which has on sharp, “F#”. So the notes in the “G major scale” are; G, A, B, C, D, E and F#. Then if you move one more space you have the key of “D”, which has two sharps, “C#” and the previous sharp “F#”. So the notes in the “D major scale” are; D, E, F#, G, A, B, and C#. As you continue around you just add the sharp in the section plus the previous sharps.

By moving counterclockwise you get the flat keys. So the first space is the key of “F” which has one flat, “B flat”. The next key is “B flat” which is two flats, they “E flat” in the section plus the previous flat, “B flat”. This sequence continues as you move around the circle.

I hope this was hopefully in understanding scales.

Harmonic Minor Extended Scale Shapes – What You Need To Know

How to Learn and Master Guitar Chords and Harmony

How To Play A Blues Guitar Scale With Easy Tabs

Learn How to Play The Minor Scale On Guitar

Types Of Guitar Scales You Need To Know

How to Play The 4 Beginner Guitar Scales