Guitar Scales and Chords That You Need To Know First

All of the notes have an enharmonic equivalent except for E and B. Enharmonic notes are the black keys on the piano and can have two different names. C#, for instance, is the same note as Db. The basic rule for naming the note is to call it a sharp when ascending and call it a flat when descending. The natural notes on the guitar are a whole step apart, meaning there will be a fret between them, except when you move from E to F or from B to C. These notes are only a half step apart and have no fret between them. See the second example below.

We don’t use the entire scale when we compose or play music. The chromatic scale is broken into smaller, more manageable scales and modes. The most important of these scales are the major, minor, major and minor pentatonics, and the blues scale. The easiest way to see these scales is by the series of whole and half steps that make them up.

Below is an example of the step pattern for the major scale. There are seven notes in the major scale (eight if you play the starting note twice) arranged in a series of whole and half steps. You can see the half steps between E-F and B-C. To get the major scale in any key start on the note that will be the name of the key and add the note using this step pattern. The example is in C. If you started on G instead and applied this pattern you would get a G major scale: G-A-B-C-D-E-F#-G. 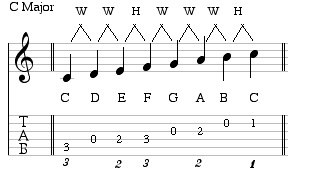 All scales and modes can be derived from the major and minor scales when you understand the pattern of steps between the notes. How much scale theory you want to know as a guitarist is up to you. Some guitar players play by ear and have no idea what scales they use, but a basic understanding of scales can be useful, particularly from an improvisational or compositional standpoint.

Guitar scales and chords go hand in hand. Where scales can be thought of as melodic, chords can be thought of as harmonic. Scales are notes played one after the other and chords are notes played simultaneously. The notes that form a chord are pulled from the scale. Basic chords contain at least three notes and are called triads. See the example below for triads built on the different degrees of the C major scale.

You can apply this formula in any key to get a chord. More advanced chords are built the same way, so once you understand the principles of “spelling” chords, you can do it in any key. To make a seventh chord, for instance, you build a triad and add the seventh note of the scale. If you want a sus2 chord you would get rid of (or suspend) the third note and add the second.

Guitar scales and chords go hand in hand. Any guitarist who wants at least some music theory background will eventually have to come to terms with them.

Learn to Play 5 Chromatic Exercises For Warming Up

How To Play The Guitar Minor Scale