How To Improve Your Skills As A Bass Guitarist

If you’re one of the lucky musicians to pick up a bass guitar, then you’re in for one hell of a ride. Every band needs a bass player, and if you can keep a steady and slick rhythm going, you’re going to be in high demand. The Bass guitar isn’t as well-known as a regular guitar, but it can be as versatile, and is played across many genres. It’s certainly just as necessary, because what is a song without rhythm?

To build up your skills as a bass guitarist, you should study and practice a few things, one of them being your scales. Any scale you can play on guitar can be played on the bass, so don’t think that just because you have less strings, you can skip out on learning scales. Scales are important to any musician, regardless of the instrument (maybe percussive players can get away with it though).

The reason scales are so important is that they show the relationships between different notes, and you can easily see which notes sound good with others. They are the foundation of songs and musical pieces, and they’re useful for communicating a ton of information with other musicians. You can put a bunch of musicians together in one room, who have never met before and don’t play the same style, and tell them to improvise a certain key, and they can pull it off. But to be like that, you’ll need to build your foundation first, and the best place to start is with scales.

For a bass guitar player, scales are easy to learn because they follow patterns. Take a look at the tab for the A Major Scale on bass. It should be quite easy to visualize and memorize the patterns. When you have this pattern down, take a look now at the A Minor Scale. You’ll notice it uses many of the same notes and it’s similar to the major scale. Of course, you want to make sure you don’t mix up both of these scales though, and that you take time to really understand the patterns.

Now, that you know these bass guitar scales using A, did you know that these same patterns can be played anywhere on the third or fourth strings? If you wanted to play a C Major Scale, all you’ll need to do is take that A Major Scale and play it on the 8th fret of the 4th string. Similarly, C Minor can also be played by taking the A Minor scale you just learned and playing it on the 8th fret. That’s the great thing about scales; once you learn one pattern, it’s transferable to any other key.

The major and minor scales are perhaps the most important scales to know, but there are many others you should look into as a bass player as well.

Next, try finding a pentatonic, blues, or jazz scale to play around with.

If playing bass is your goal, I recommend you to check out thses courses in DVD:

How To Play Pentatonic Legato Guitar Lick in E minor

Quick Lesson On What Are Exotic Guitar Scales

Stretching out the Pentatonic Scale 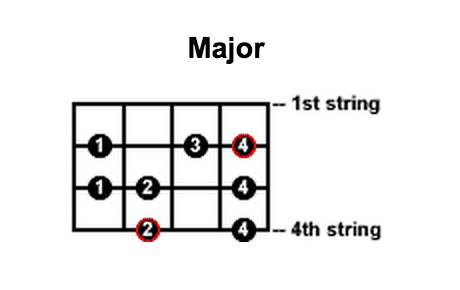 Whether you’re a beginning bass player or a beginning guitar player, scales are extremely important and necessary for you to expand your abilities and take

For even the most seasoned guitar player, scales can be a little intimidating, hence you searched for Simple Guitar Scales Tab For Beginner Guitarists. They