I know, I know, it’s the forbidden song. But learning How to Play Stairway to Heaven Solo will put a smile on your face and give you some new and useful licks and techniques for your arsenal. It is a lot of fun to play and I know you will love it! Just don’t play it at the guitar store LOL! 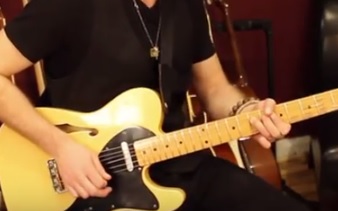 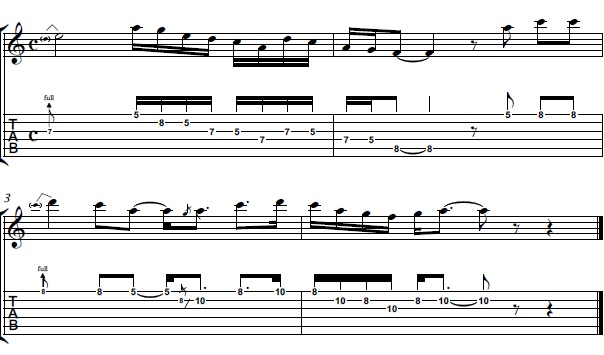 Hey how’s it going? My name is Jon MacLennan and thanks so much for joining me in this video lesson. I want to show you some more guitar licks by yep you guessed it one of my favorite guitar players Jimmy Page and I really love the solo that Jimmy plays on stairway to heaven from the song remains the same. It’s like you know three or four minutes longer than the recording one which is already along guitar solo but he really opens it up on the live one, but he generally always kind of starts out in the same position and same sort of melodic ideas. So let’s zoom in and break it down.

So Paige is starting out here in the key of a-minor and he’s using mainly an a minor pentatonic scale. I would start with your third finger on the seventh fret of the third string and bend it up a whole-step like this, don’t bend with one finger, I always put other fingers behind it to help control the string. Then you jump up, which this is just a great blues lick by the way, but once you land there on the fifth fret of the first string you descend pentatonic all the way down to the root. Now when you come back up to the third string, instead of going here, which would be the next note of the pentatonic scale, Paige goes and hence the phrase on the note F because the band is actually playing an F chord at that point. He ends there in unison with them as opposed to getting this note which would’ve made it in F major seven, but he doesn’t do that. Then you go to the second string 8th fret and you bend up a whole-step and then you add your pinkie right underneath, total classic rock lick. Then the 8 on the first string and then slide from 8 to 10 on the second string and then this is all pentatonic. So altogether you get… One more time, I’ll slow it down.

All right, well I hope that adds a few new tricks to your minor pentatonic bag of tricks. Don’t forget to hit subscribe and we’ll see you in the next lesson. Thanks for watching How to Play Stairway to Heaven Solo.

Hybrid Picking Technique On A Pentatonic Scale – Made Easy with Video

Arpeggios With Pentatonic Scale in the Style of Paul Gilbert

Learn How to Add Sliding Notes to Pentatonic Scales

This will make you smile