Get To Know All Of The Pentatonic Boxes

In part one of Guitar Control instructor Robert Baker’s three part series called, “Ultimate Pentatonic Road Map”, Robert has made three different elaborate videos about the pentatonic scale. Part 1 which we are going over in this article, focuses on the pentatonic boxes.

In this video Robert is actually going to cover all of the pentatonic boxes, and he doesn’t mean just five, he is going to start at the beginning in open E and end at the end of his fret board, showing you all of them! In part two he will go over how to apply them and how to get out of the boxes a little bit and using them with each other, and in part three he is going to give you all kinds of pentatonic licks to try out because you will already have that road map down! 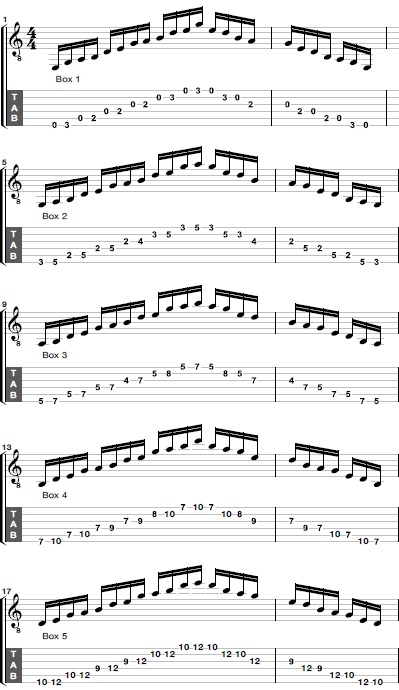 Now we are going to work our way on to pentatonic box 2. For this one Robert leads with his middle finger to pinky on the 6th string picking frets 3 to 5. Then on the 5th and 4th string he picks the 2nd to 5th frets using his pointer to pinky, and now you can see why he start with his middle finger it gives him an advantage because when he got to the 5th string his hand was already lined up and ready and in position for the other notes. On the 3rd string he plays the 2nd to 4th frets using his pointer to ring finger, and you may have noticed he did shift his hand here, since before when he played the same frets on the 6th string he used his middle finger to pinky fingers.

Why he shifted here is because using his middle finger to pinky finger isn’t necessarily a common finger situation that he uses very often. So choosing to shift on the 3rd string, he feels, isn’t such a big deal, and same goes for if you want to stick to using your middle finger and pinky, it’s totally up to you and your personal preference, but he is using his pointer to ring finger. Then he shifts again on the 2nd and 1st strings using his pointer to ring finger again on both strings and playing the 3rd to 5th frets on both strings. And that is box number 2!

Step 6: Playing The Boxes in Octaves

The reason Robert changed the fingers this time is because as you go up the neck the frets become smaller so it is easier to use fingers that are closer together to get wider stretches than you would be able to get if you were playing this same scale further back on the fretboard. These shapes should be becoming familiar now since we are playing them for the second time.

I hope you enjoyed this lesson. That is all of the pentatonic boxes! First start by memorizing all of these and then in the next video Robert is going to show you how to practice these, ways to get out of ruts, and to get you right on track to moving around and improvising and soloing with the pentatonic scale. Make sure to check out both parts 2nd 3 to this series and as always, have fun! That’s what it’s all about.

Easy Guitar Lesson on How to Play the Major Pentatonic Scale

How to Play The Most Common And Basic Blues Guitar Licks

Arpeggios With Pentatonic Scale in the Style of Paul Gilbert

Learn How to Add Sliding Notes to Pentatonic Scales