Fingerstyle guitar refers to a technique of playing guitar that involves using your fingers to play the strings rather than a flat pick. You can use picks that fit onto your fingers as well, but in fingerstyle picking, you are always using the fingers to play the strings. This method is often found in classical guitar playing and banjo playing. The advantage of using your fingers instead of a flat pick depends on what type of music you’re going to be playing. For single lead lines, a flat pick is usually the best way to go because it allows you to play faster and more fluidly. Some guitarists, however, simply prefer the fingerstyle method. Mark Knopfler of the Dire Straits and Lindsey Buckingham of Fleetwood Mac are two rock players who use fingerstyle playing exclusively. Click here to watch a cool lesson on figerpicking technique FINGERPICKING GUITAR LESSON Chord/melody arrangements of songs are usually better suited to the fingerstyle method of playing because it makes it easier to build melodies around chord structures while you play a separate “bass line” on the lower strings of the guitar. Fingerstyle guitar songs are typically very busy and have a fuller sound. While many songs are written to be played fingerstyle, any song can be arranged as a fingerstyle song, even if it doesn’t seem to be suited to fingerstyle in its original form. Arranging a song to be played with a fingerstyle technique requires some skill and an understanding of harmonic and melodic structure, or at least a very good ear. Before you go about re-arranging some of your favorite songs to fit the fingerstyle technique, do a little research online. You can find a lot of guitar books or online tab sites that have quite a few popular songs already arranged for fingerstyle guitar playing. If you decide you want to create a fingerstyle arrangement of one of your favorite songs, there are a few things to consider that will make it easier. First, listen to the song you want to arrange and isolate its key components. Listen for a distinct bass line or riff that you can play to give the arrangement a connective thread or a solid rhythmic foundation. Fingerstyle guitar songs rarely use full chords and rely instead on a combination of bass lines and melody to present the musical idea. Melodies are played on the top (high) strings of the guitar and connected with an intertwining bass line or a repeated rhythm figure that gives the song movement. If the song you’re arranging isn’t an instrumental, you’ll build your melody lines around the vocal. How much of the vocal line you play depends on whether or not your arrangement is an instrumental or if you intend to have a singer. It may take you some time to learn the fingerstyle guitar technique. It requires skill and a certain amount of coordination and can be tricky at first. With practice and patience, you’ll quickly find yourself learning to play fingerstyle guitar songs or even turning your favorite songs into distinct fingerstyle arrangements. Here are a few songs written for fingerstyle or that sound great adapted to fingerstyle. Tears in Heaven – Eric Clapton Dust in the Wind – Kansas Fast Cars – Tracy Chapman Stairway to Heaven – Led Zeppelin Blowin’ in the Wind – Bob Dylan Holiday songs, standards, and folk songs are also ideal for fingerstyle arrangements. 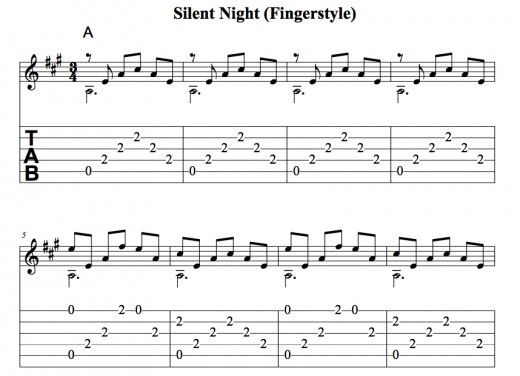 If you want to get serious going way deeper I suggest that you check out this course in DVD: FINGERPICKING SECRETS