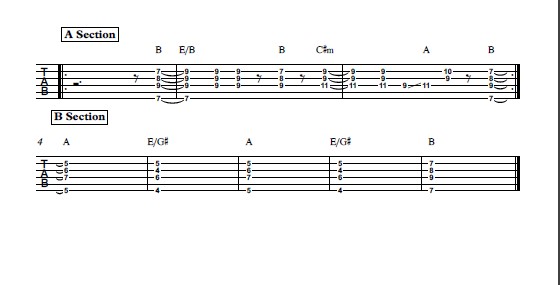 Let me show you how I play the opening rhythm guitar part, I’m sort of the Hendrix school of playing where I use the thumb a lot so I can show you how I do it and then I’ll show you an easier way too if this is too hard but basically I’m beginning on a B chord, my first finger is on the 7th fret 2nd string and then I put my second finger right diagonal on the 8th fret 3rd string and then the 9th fret 4th string, then my thumb comes up over the top and plays the root B at the 7th fret and then it comes over a little bit more and mutes the next string and then my first finger mutes the 1st string, so there’s a lot of dampening going on as well so that’s the 1st chord and then you immediately flatten your third finger down from this B triad to an E triad but you still have the B in the bass so it ends up being like an E over B. So it’s 4, 10, and then you do 2 more strums on that 9, 9, there and then you go to A, B, back to the B. So A and then C sharp minor, which is the same as this B chord just up two frets and then you take this middle note and lower so it becomes actually a minor triad. That chord would be 9, 11, and 9.

You can play it if you want just that I like it in there, then you strum it again so we have 4 so what happens is you take your third finger on the 9th fret 4th string and slide to 11 and then you’re going to put these other two fingers down which give you an A triad up here which is real nice you know especially if you want to include the open A-string but the frets are 11, 9, 10, then you go back to the B and you start over again with that hammer-on.

This is sort of the basic rhythm field there’s a lot of variations that he does and Keith Richards, is so good at just having that rhythm feel and the vibe of it is so amazing so you can do things like instead you can hammer-on just kind of Hendrix that kind of sound, so that’s the cycle through basically you know 4 chord shapes. Now if you want to make it easier you can omit the thumb so that you could play it like that.

Let’s move on to the B section, it begins on an A chord and you’d be coming off the previous section you’d be going like probably just stay on, coming from an A but I might go to a different chord shape I might go down to this A chord which would be my thumb on the 5th fret skip A-string 7, 6, 5, and then this chords is going to last for a whole measure.

So this over G sharp, the next chord 2, 2, 3, and what I’m doing there is I’m taking that same chord that I have up here like an A, but putting it on the 4th fret so those frets starting from the 2nd string will be 5, 4, 6, and then my thumb’s on the 4th fret the / G sharp so 1, 2, 3, 4, up to B, then you go back to that 1st section. The next thing you can kind of start to think about is playing a little bit of lead over this and when I think about the chord progression it’s in the key of E, so the 1st thing I would tend to gravitate to would be an E major pentatonic which if I played it would be like this.

The idea is that I’m kind of improvising around using notes in that scale and if you stick to those notes you can pretty much play any note at any time and it’ll sound consonant now there was a little run that you could do something that comes off of the recording and by the way you know when you transcribe from the recording I’ll teach you these things so for instance, what scale to use or how to play over it so that’s like one of the licks and what you can do is you can start here on the 9th fret 5th string, slide up to the 11th and then just walk up the scale and you can hammer-on could pick out all two but I think it’s kind of more legato and then bend that 12th fret and then back down and then right above it on the 2nd string and I guess I kind of did a hammer-on into a bend so that’s kind of a cool effect and that’s going to sound great anywhere backwards, just to give you some ideas for sort of soloing over this as well which is a lot of fun all right well don’t forget to keep practicing and for more information you can click on the annotation on your screen or the iCard, if you’re on mobile and you can check out one of the DVD courses at guitar control.com. Make to subscribe on our You Tube Channel and we’ll see you in our next video lessons, thanks for watching.

Challenge Your Chops With This Tranquil Backing Track