Hey, how’s it going this is Jon McLennan with Guitar Control, hope you’re doing fantastic out there just got a few licks from Eric Clapton’s guitar solo on the song written by JJ Cale called “Cocaine”. It’s a great groove in the Key of E, it got some awesome pentatonic licks with a really strong rhythmic phrasing. 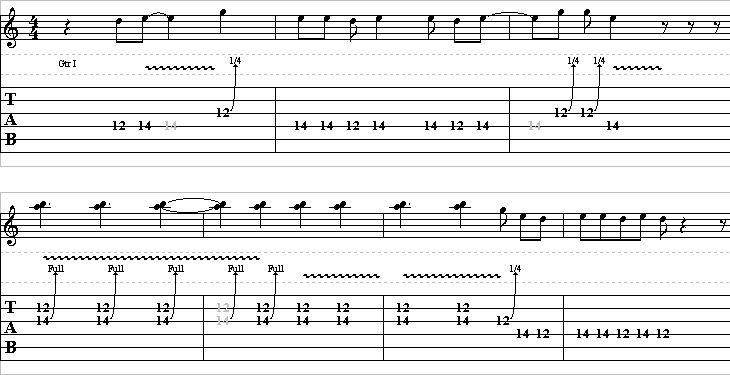 Here’s the first few bars of the solo and one of the things I love is, starting on beat two basically with 3 notes 12th on the 4th string, 14th  on the 4th string and 12th  on the 3rd string. It’s really satisfying because of the rhythm, one of the things to take note is whenever I played this note on the 12th fret it’s what we call a blue note, where I basically bend it between the notes it’s like a 1/2 bend not a half-step, but like half of a half it’s like between the note G sharp and G, it’s the Blues. You see it immediately sounds like the way the guys do it, that we love Albert Kings, Freddy Kings, Stevie Ray Vaughan’s, Clapton’s, Jeff Beck.

Here’s the first lick again one then goes to Hendricks double stops which are great. 12th on the 2nd string, 14th on the 3rd string and what you try and do is hold your first finger relaxed, while the third finger lifts up a whole-step. Whenever I bend my thumb over the top, that helps me get the strength then go back here and then we’re just pivoting back and forth on the root and the flat 7th. All of this is in an E minor pentatonic scale.

That’s a real powerful device where you do hit those, I think of them as Hendrix double stops because he would do things like kind of selling stuff. Once again here’s the first few bars of the solo, one of the things I love about this solo is how he stays pretty much in one position in the entire solo and makes so much music, he doesn’t use a lot of notes but makes the right choices with the phrasing and the rhythm. It just makes it really strong, one thing to take notice. Make sure to subscribe on our YouTube Channel and we’ll see you in our next video lessons, thanks for watching.

How to Play Cissy Strut by The Meters