How To Play Whole Lotta Love

In this Guitar Control video we are going to learn how to play Whole Lotta Love, more specifically, the solo to Whole Lotta Love. This solo is awesome, and of course it is because it’s Jimmy Page. Some of these bends are wild, and the feel and attitude are awesome. This solo will push you to make that guitar sing and pay lots of attention to detail, vibrato, and feel. Let’s break it down.

Step 1: Breaking Down the First Half of the Solo

The first step in learning how to play Whole Lotta Love is breaking this solo into parts. This way we don’t get overwhelmed and can take it all in piece by piece and then put it all together. The very first lick starts with this kind of classic blues lick in the E minor pentatonic pattern 4 position, and we bend a whole step on the 14th fret on the 3rd string and which its in the air we bar with our pointer finger on the 1st and 2nd strings on the 12th fret. So we bend, pick pick. Going from the 3rd string, to the second, to the first. Then we’re going to pull off on the 2nd string from the 15th fret to the 12th fret. If you aren’t familiar with what a pull of is, it’s a guitar technique where you have your finger down on the sting you are picking but you also have the finger for the next note down on the same string behind it. Having this finger planted makes it so when we pick once and pull off, we do just what it sounds like we do, that it sounds smooth cause it goes straight from one note to the next. Also the pull off motion acts as a pick. So only one pick attack but you hear two notes, smoothly connected. Then we’re going to straight to the 3rd string and play the 15, 14, and 12th frets each once, also a pull off from 15, to 14, to 12, so only one pick for those three notes. Then back to the 14th fret 3rd string, to the 12th fret same string hammering on to the 14th fret same string but this time we hammer onto the 14th fret we bend it up one full step. A hammer on is really similar to the pull of but it’s the opposite direction. It’s the same concept but hammer ones are ascending and pull offs are descending. So you pick once and then keep your first finger planted and slap down your other finger to the next note.

Step 2: A Closer Look at the Second Half of the Solo

The third lick is very similar to the first, but has a different ending. So this lick starts out just like lick one with the same blues lick where we bend and bar. If you need to check yourself on your bends to make sure you are really bending to the right now, for a full step bend you go up two frets, and hear what the note sounds like and then match it with your bend, or for a half step bend, just go up one fret to hear what your bend should sound like. So same thing, we bend the 3rd string 14th fret a full step and while it’s in the air, we bar the 12th fret with our pointer and pick the 12th fret 2nd string and then the 12th fret 1st string. Here is where we change. Unlike before when we use the 2nd string 15th fret to do a pull off, we are going to bend it only up twice in a row, not up and down. So just up, up. Then we place our pinky on the 1st string 15th fret and pick it once and then end with another whole step bend on the 2nd string 15th friend only up, once.

So after that we are going to pick the 17th fret 2nd string and go straight into a whole step bend on the 19th fret 1st string, then we are going to go chromatically from the 19th fret to the 17th, so picking them individually, 19, 18, 17, all on the 1st string. Then back to the 2nd string and pulling off the 20th fret to the 17th fret, two times.

For our very last lick we’re going to go back to our 17th fret 2nd string, then we’re going to just pick the 19th fret on the same string, and then pick it again and bend it a full step, twice in a row, and then we are going to bend it one and a half steps, the third time we bend. Then we pick the 19th fret on the 1st string and then end this lick and the entire solo by landing on the 17th fret 2nd string with lots of vibrato on it.

I hope you enjoyed learning how to play Whole Lotta Love as much as I did. This solo is killer! So much feel and attitude and bends I’m sure you’ve never done before! So be sure to break these parts into sections and tackle them one at a time so you pay close attention to detail and feel. Work on making your guitar sing this, and as always and most importantly have fun and enjoy learning and practicing this solo. 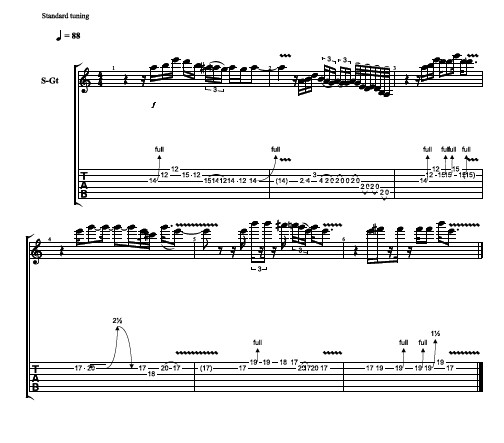