Hey, how’s it going this is Jon McLennan with Guitar Control, in this lesson we’re looking at a Classic by Steely Dan called “Pretzel Logic”. It’s a great tune, I love this band and it’s got great harmony great guitar playing. I’m going to break it all down for you so click on the Tabs button to follow chords and tabs that goes along with this video lesson. 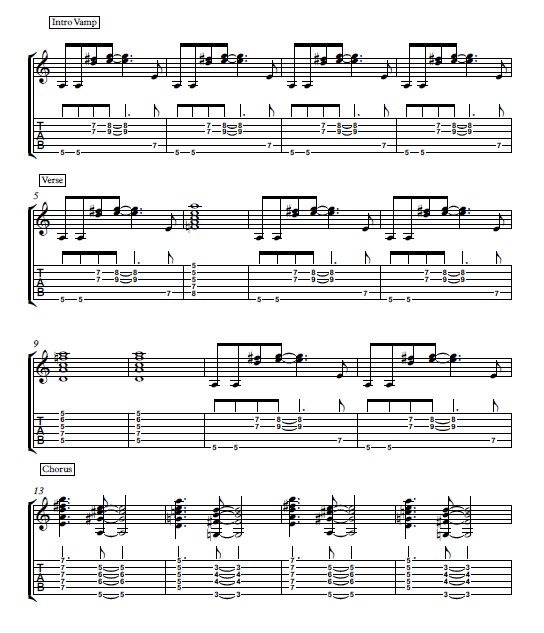 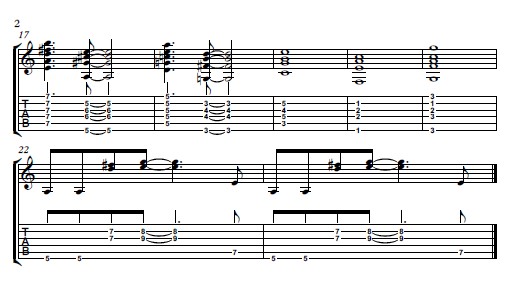 We’re going to zoom in and break it down, so I came up with this way of playing that keyboard part on guitar and just trying to create that Intro vamp so it’s based off an A minor 7 chord and one of my favorite ways of playing this is like putting my thumb on the 5th fret and then putting my first finger and borrowing it down 4 strings. The 1st through 4th string and I use my thumb there and what I’m going to do is play that note twice and I kind of palm mute it a little bit so I’m laying my palm down and taking a little ring out of the note then I play these two notes on the 2nd and 3rd string at the 7th fret D and F sharp for those notes then I move up to E and G so and I’m playing those notes with my fingers and then the other note that I’m adding in there is the 7th fret on the 5th string so it’s like 4 & 1 & 4 & 1 awesome group then the vocals come in with at great bluesy melody and so you continue the vamp for one bar so it’s like F major 7, back to A minor so for that F major 7, I’m basically playing 8, 7, 5, 5, 5, nice little cord there so it’s for A minor seven and A minor then you go to D minor 7, back to A minor so two bars of D minor 7 back to two bars of a minor 7 and again whenever I have a minor I’m going to insert that sort of Rhodes groove, so if I start at the top of the verse here we go 1, 2, 3, 4, D minor 7 then two bars of A minor 7 and then that leads us into the chorus you’ve got the intro and verse.

Let’s move on to the chorus, now the chorus has some hip changes and so far we’ve kind of been in an A minor sort of shuffle blues feel and now we’re going to change to the key of A nature for a minute which is pretty cool it’s like the Sun comes out you know so that section begins on an E11 chord you can also  think of this as D over E but basically it’s just holding one finger at the 7th fret and covering for 5 strings from the 5th to the 1st eleven to A major 7 and that’s played five skip A-string six, six, five, so then you go down and do the same thing two frets lower D11 to G major 7 which is three now all these kind of jazz chords. I don’t really play any open strings just keep them all nice and tight okay so the melody on top is like so that’s you know the melody so the guitar is going three times through that cycle and then you end with this way

Next up is the bridge let’s break it down next we’re at a guitar solo which basically follows the same form as the verse go through that go through the chorus and then out of the chorus we have an A minor vamp for 4 bars again we go back to our keyboard riff and then we go this D11 and that’s sort of just likely a rhythmic hit that leads us into the bridge where these hits the guitar like, there would just go 2, 3, 4, and then two hits on F,3, then 1 on E minor, 2, 3, 4, then you can do this walk-up, back to that D minor so that was 5, 5, 5, 7, 7, 7, 8, 8, 9, 9, 9, D minor, back to A minor, then back to the chorus again and then we take it to the outro guitar solo.

For that outro solo we’re basically just going over A minor and F major 7, F over G. It’s got a lot of great riffs over that chord progression, let’s get into my favorite part the guitar solo so I recorded down just that vamp basically the three chords on the on the outro there and a lot of the solo there is using pentatonic scale and it sounds really cool to play A minor pentatonic against those hip jazz changes and I’ll show you a few lines of examples, the first one goes like this fifth position I’d bend up at the 7th fret and then  do 5, 5, then back to 5, A5 and then you slide the 7 from A and do a pull off 7, 5, roll over 5, 7, 6, all over the string they’re really cool lick you know I’ve played a million pentatonic licks just like that but I never would have thought to come up with that one try to think about fingering for that, so basically for the next I would bend 7, 5, and they come back to this 5 slide to 10 and then play 8 and then you’ve got this 4th slick which is really nice, so it’s just 9, 10, 7, 8, 5, 6, resolved to 5, kind of give you example of just playing in this style here’s the vamp and it also doesn’t had a double stop, so you can get the idea there.

I really hope you get inspired from this lesson to keep playing and keep practicing for more information you can click on the annotation on your screen or the iCard if you’re on mobile you can check out one of the courses from Guitar control.com there’s a lot of good ones there. I’ve got some on there and a lot of other teachers and content so be sure to check it out don’t forget to subscribe on our You Tube Channel and we’ll see you in our next video lessons, thanks for watching.

Easy How To Play “Come Together” By The Beatles Guitar Lesson

How to Play One of These Nights on Guitar: Eagles Song Lesson

How to Play the Trooper by Iron Maiden – Easy Guitar Riff

How to Create a Blues Lick On Guitar – Part 2