How to Play `Hurt´ by Johnny Cash 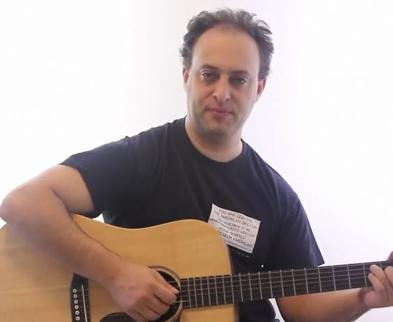 In this free lesson from Guitar Control. Instructor and Guitar Control founder Claude Johnson is going to show you How to Play `Hurt´ by Johnny Cash. This is a really easy tune to pickup with the step by step video instructions and included chord charts. Start rockin’ this tune today!

So How to Play `Hurt´ by Johnny Cash starts off with C, D and A minor and if you don’t know those chords check out my other video on the seven basic beginner chords that you should start with once again, E minor, G, C, D, E, A and A minor. So this riff consists of those three chords that are part of those basic 7 so hopefully you’re up to speed on that. The picking patterns going to go like this… Okay that’s how the vibe goes with the lyrics. So it’s real simple, what I’m doing here is I got my C chord, I’m picking down with my pick as a down stroke going on the A string, the D string and then I’m plucking, so my pinky is on the high E string, ring finger is on the B string and index finger is on the G string. So I’m going to just kind of pluck all of them at the same time. So we have this… and then if you counted it out it would be like; one, two, three, four. So you’re going to hold that pluck twice as long as the picks. The D chord, same thing except you’re only plucking two strings because we’re starting here on the fourth string, so it’s like C and then A minor, same thing as the C and there’s no there’s an additional long pause. So if you were to count it out each bar you’d be like; two, three, four. Okay so you really hold that on two, three, four, 1234, 1234, 1234.

All right, so pretty simple and if you’d like to get more info on chords, picking patterns, rhythms, strumming and a ton of killer song lessons with chord charts, tabs and all the parts broken down, it’s all in my Ultimate Beginner Guitar Course, which you can find out about at guitarcontrol.com/beginner and even if you’re not a beginner, it’s a great course with a killer repertoire of songs so check it out and I’ll catch you next time. Take care and thanks for watching How to Play `Hurt´ by Johnny Cash.