B.B. King Guitar Lesson – How to Play Paying the Cost to Be the Boss

How to Play Paying the Cost to Be the Boss

In this Guitar Control video lesson, Instructor, John Maclennan is going to show you how to play Paying the Cost to Be the Boss by B.B. King. This song is full of tons of classic B.B. King licks. John is going to breakdown the whole intro solo to this song and show you how to play the rhythm as well so that you can play through this entire song. The recording to reference for this video is, “The Best of B. B. King”

For the rhythm John is going to show you some classic B. B. King style 9th chords. It is well known that B. B. King was much more of a lead player and didn’t play a lot of chords, but he would use this one. John suspects he may have gotten it from T. Bone Walker. If you’re enjoying this song but want more blues rhythm tips check out our other lesson on how to play Stormy Monday by T. Bone Walker. To play this chord put your first finger on the 6th fret of the 5th string and barring it down through the 2nd string, then place your third finger on the 4th string 7th fret, the 3rd string is held down by your pointer barring, and your middle finger is on the 7th fret on the 2nd string. That is a B9 chord. Then he is going to go to an E9 chord. Middle finger on the 7th fret 5th string, pointer on the 4th string 6th fret, and ring finger barring from the 3rd string all the way down through the 1st on the 7th fret. Play along with John while he counts at 12:48. Playing along in just a basic 12 bar structure.Then he adds in an F#9, it’s the same shape as the E9 just moved up two frets. So now middle finger on the 9th fret 5th string, pointer on the 8th fret 4th string, and ring finger barring from the 3rd string down on the 9th fret, right back down two frets to E9, then back to the same F#9 and resolve back to the 1. Follow along at 13:36 with John and an added bass line. John also gives some tips about other cool things you can do with the chord shapes. First one being just taking the top three notes of these chord shapes and move them into a sliding figure, see 14:08. So just playing the top three notes of these chords, the 3rd, 2nd, and 1st strings. John demonstrates at 14:52 what he is talking about by sliding these higher voicing chord shapes. He does this idea all around the same chords sliding a whole step away and back all around the same 12 bar blues structure. This is the kind of thing John would just feel out and respond to the music and whatever the rhythm section is doing and create rhythm patterns out of those chord shapes.

Recep: How to Play Paying the Cost to Be the Boss

I hope you enjoyed learning how to play Paying the Cost to Be the Boss! This is such a fun song with so many cool classic B. B. King licks and ideas that really show so much emotion. This is a great lesson for learning licks, learning how to create themes in a solo, learning how to write a solo, and learning how to really add feel to your playing. All of these licks have awesome characteristics and vibrato and bends that really make the guitar have a voice of its own. Practice not only the notes he plays but the way he plays them and how he tell his story. Then try and tell your own! And of course, as always, have fun! 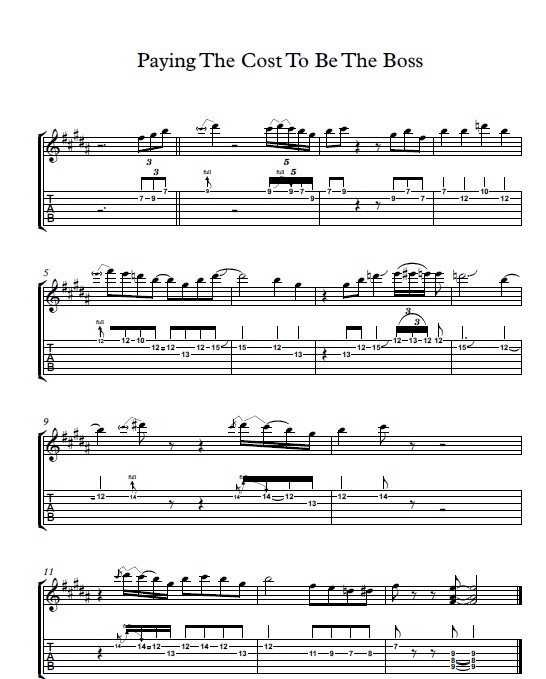