Hey, how’s it going this is Robert Baker with Guitar Control, I’m going to teach you how to play the song called “Can’t get enough of your love” by Bad Company. We will be walking through this whole song learning a bunch of the riffs of the guitar solo stuff. 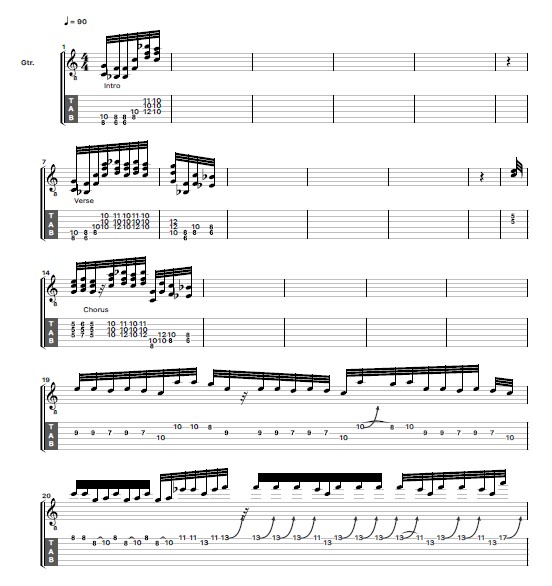 Let’s go ahead and break this down, so the Intro part would go like this I just put the power chords, the whole songs a whole bunch of power chords we’re just doing the 8th fret on the low E-string and then 10th from the A, C5 they ring out then you get to leave down two frets and you’re going to play the 6th fret on the low E and 8th fret on the A twice then you move up here to 8th fret on the A in 10th from you here’s a super classic you know seventies rock-and-roll staple is used in so many songs you’re simply going to bar 10th fret on the D, G, and B, and you take your middle finger and put it on 11 on the B and your ring finger will go 12 on the G you’re going to hold it down like that I’m will be 12, 10, 11, when you pick it up and you have that quarter you’re kind of going from this so we should have this and that’s pretty much the intro and then the verse is very similar it just kind of sped up a little bit so it’s the same chord you have this and that’s just something you in the ten first let’s pay attention you put your fingers down and we’re going to go to this G5 we’re soon going down ten on the A, 12 on the D and 12 on the G you get on the six on the low E back to 8 on the you go to 6 on the A- string so that somebody’s moving down two frets doing a power chord and twice.

So we’re going to be borrowing five it’s the same thing that we were doing before borrowing five on the D and G so this is the chorus you’re going to borrow that and you’re going to simply go through that and then you put your middle finger down on six and you’re in for then you’re going to go to that part where the kind of ending the chorus that’s back then intro so we’re onto the solo – let me go ahead and play it for you once slow so what’s happening what starts out right here on nine on the G so goes 9 to 7, 3, 9, twice then goes back to 9 back to 7, 10 on the D, then you go 10 on the B, then you go 10 again and you go to 8 on the B and 9 on the G starts over.

I hope you enjoyed that lesson and got something out of it it’s a really fun song just so many cool little riffs and make sure to subscribe on our You Tube Channel and we’ll see you in our next video lessons, thanks for watching.