How to Play Already Gone on Guitar: Eagles Song Lesson

Hey, how’s it going this is Jon McLennan with Guitar Control, I’m going to show you how to play “Already Gone” by the Eagles. We’re going to do their greatest hits from 1971 to 1975, every song and there are so many amazing guitar parts in these tracks this is track number four off that album. 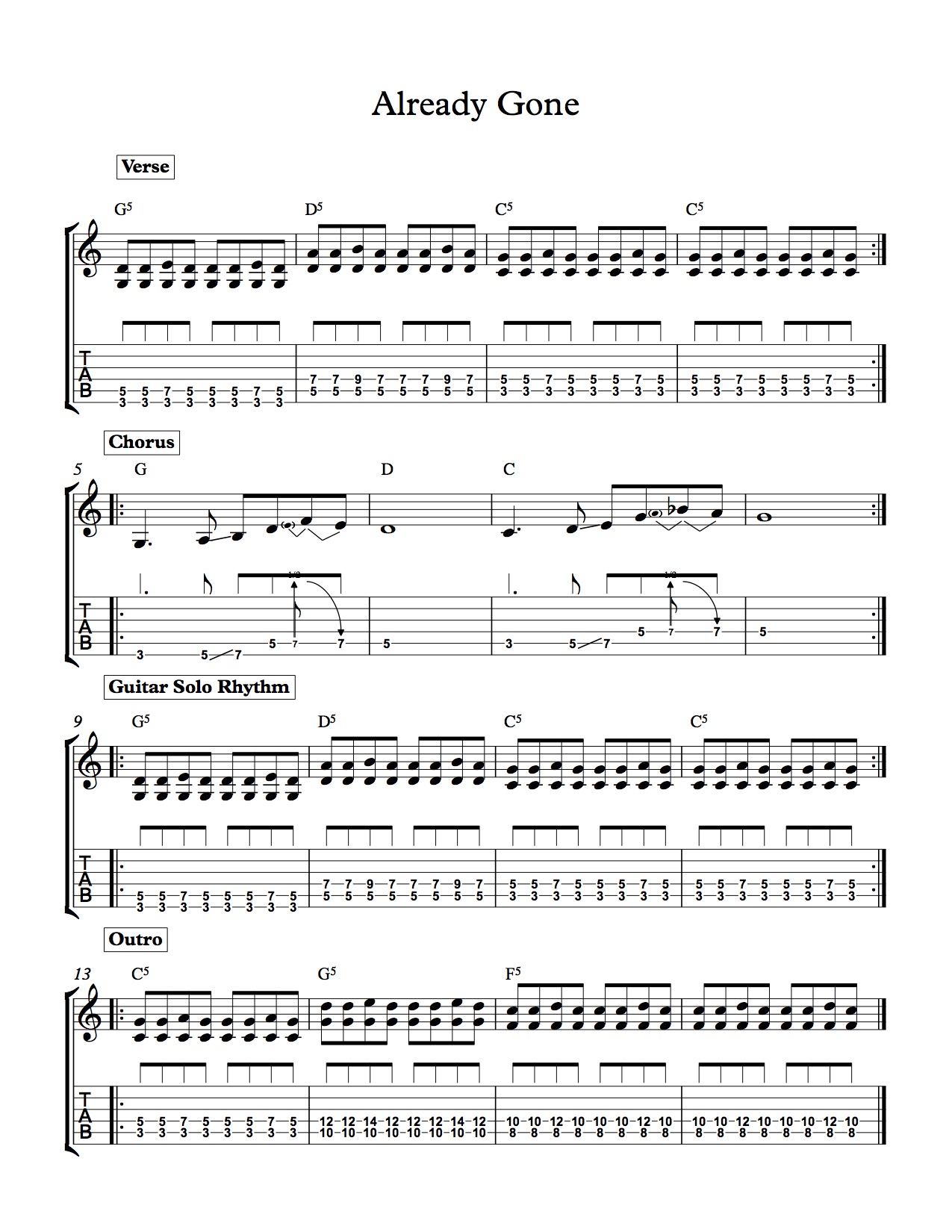 We’re going to start off with that intro riff, the intro starts out on this great country rock lick and the chords that are happening are just three chords they’re basically G, D, and C, so you’ve got 2, 3, 4, 4, we start out on a pickup one and they’re all just 8th notes. So I’m playing the 4th fret open 2nd 4th open 2nd open and then you do this sort of pedal steel kind of sounding double stop bend and what I’m trying to hold is the 3rd fret here and play the 2nd fret and bend that 2nd fret up a whole-step but keeping that 3rd fret in there as well and letting it ring throughout sharp and that’s the thing about these country bends you want to try and get them is in tune as you can.

Then you go to this D chord it’s like a D5 it’s like a D with the omitting the 1st string and you hammer-on and you start to play with your finger off and hammer to the 2nd fret and then it does this walking line. And put your pinky on the 4th fret 4th string and you kind of strumming it, making it sound like a chord.

So I get these nice open bringing strings, a cool effect where you let the open strings ring. I’m almost thinking like a strum, one then I go to a C shaped like a C chord because remember our three chords were G, D, and C, but I’m going to play these three notes which is said like a triad. It’s like a C with the bass note missing and I do a hammer-on and then I try and play these two strings and then the one string and then the two strings. So from the D and then I make a kind of sloppy sliding but I use my 3rd and 2nd finger and slide in the 9 and 8 which is again part of a C triad, from this to sort of initiate and slide it back to 5, 5, these are kind of thirds very classic egos you’re like that third sound. That would be slide, slide then bring it down two frets then go to 5, 5, then play 7, then 5, 5, and 6, and 7, again coming from the D.

Then I switch to the action of the other guitar part and this is kind of the Classic line you hear in the chorus which is like a bass line almost and it sounds like the classic country lick, but it’s a spin-off that so you got 3, 5, slide to 7, 5, then pull down 7, just a half step and then back and then to 5. So over those chords you do the same thing down one string and copy/paste and you’re into the end of the rhythm figure of the verse, so that’s the intro.

You’ve got the 1st part down; now let’s move on to the next section. Let’s talk a little bit about the rhythm part, so the whole song really except for the outro is the same three chords it’s G, D, and C, in that order the verse and the chorus but the guitar part changes through each section and it keeps it interesting so the first thing we’re going to learn for the verse is this typical rock and roll pattern and it’s based out of the Blues I call it like the root 5th root 6 sort of rhythm playing.

What we’re going to do for the verse is we play the 3 and 5 just these two notes on the 6th and 5th strings and then I’m palm muting here, my palm is laying down where the string and the bridge comes a string with the saddle pieces come together, and I just dampen the note a little bit. I’m going to go one and play two 8th notes and then my pinky is going to reach out and play the 7th fret on the 5th string. So I’ve got 3, 5, 2, 3, 7, and again you can click the link for the tab that I’ve tapped out all the other rhythm parts for this so you can follow along but 3, 5, 3, 7, and it’s just going to play one. You pluck on the 7th fret and it comes off and goes back to 3/5. So it’d be one and two and that’s it, that’s all it is so one, two, and then it repeats then you’re going to go up to the 5th fret and go down one string and you’re on five and seven. You do the same thing then move down two frets and do C, and then C goes twice so it’s once on G, once on D, twice on C, this is the first and then we go to the chorus and for the chorus I go back to that Intro figure.

I’m playing just the base note 3rd fret and sliding up doing a half step bend and since the chords like I said are all G, B, C, sometimes I’ll include where I can part of that barre chord. Since I’m just sitting on five why not throw down the D chord and then C, sometimes I will grab part of that same seat over, so I mix it in and keep it interesting, whatever I can do to spice up those three chords and that’s basically it. You repeat those parts and you play the verse part for the guitar solo and then we go to the last section which is the outro.

Outro does these three cords it does c5 and it does g5 like we were doing before but I like taking it up to the octave so I’m on 10, 12, and then you go down to 1/2 so the end of the tune goes like this kind of a twist. I hope this lesson inspires you and makes you want to keep learning more about guitar for more information you can visit guitar control.com check out some of the courses available from different instructors. Make sure to subscribe on our You Tube Channel and we’ll see you in our next video lessons, thanks for watching.

The Ultimate 16th Note Guitar Practice Video 16th notes are a staple of funk, folk, rock, pop, metal, and plenty of other genres of music,