How to Play Getting Better on Guitar – Tesla Lesson

Hey, how’s it going this is Darrin Goodman with Guitar Control, I want to show you the Intro for “Getting Better” by Tesla. It’s a great song you can play it on your electric guitar or you could play it on your acoustic guitar it’s got a lot of different chords and stuff in it so you know go through all of those chords and everything. 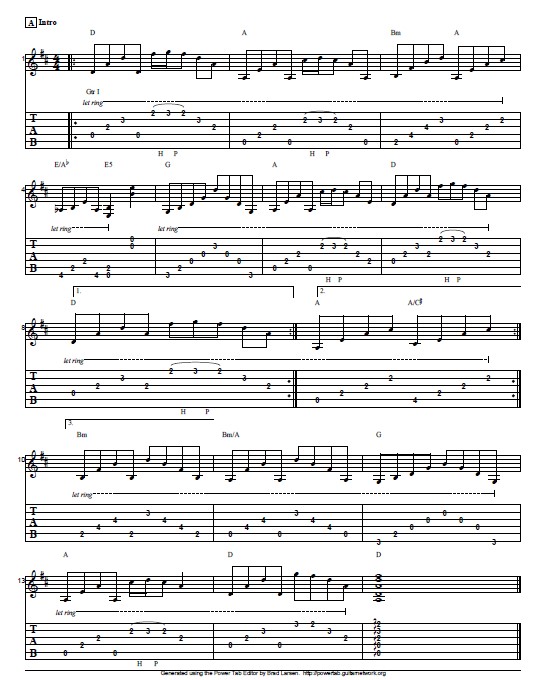 The first chord that we’re going to be using is this just a D, so this just uses a lot of just the open chords that hopefully already know how to play, we have a D, an A, a B minor we have A over a flat which is if you just barre across the 2nd fret of the 5th of the 4th string and then fret the 4th fret of the 6th string with your third finger E5, G and A over C sharp, so that’s just an A but the 5th string instead of being open we’re going to play the 4th fret and then the last chord is B minor over A so if you just do a regular B minor barre chord but you play the 5th string open so I just simply move my first finger from barring across the first five strings I just move it up so I’m only barring across the first four and that 5th string is open.

Moving on to the third measure we have B minor, the first two beats is B minor so it’s 5, 4, 3, 2, and then 2 an A for beats 3 and 4, 5, 4, 3, now we go on to the first kind of funny sound chord which is E over A flat so again I’m going to barre the 2nd fret of the 5th and 4th string with my first finger and then pick up the 4th fret of the 6th string with my third finger. So now I’m going to pick 6, 5, 4, 6, and then it goes to the E5, so you already have your first finger where it needs to be for a five you’re just going to simply take your third finger off so the 6th string open. So starting on the E over A flat take your finger off and then the first two strings open that fourth measure then moving on to measure number five we have a G so 6, 5, 4, 3, 2, 3, 4, 6, then moving to the next measure it’s an A and this is just going to be the same way you played it on the second measure with the hammer-on pull-off thing and then to A, D, and it’s going to be just like the first measure there actually I guess it’s slightly different instead of going to the 4, 3, 2, and then the hammer-on pull-off things and then moving to measure number eight you repeat you just do the same thing, this is the first ending so from there you’re going to go there the a major number eight it shows your first ending.

So starting at the last measure before the third ending is D. Now we go to a B minor just put your fingers on the shape of the B minor pick the strings from left to right so 5, 4, 3, 5, 2, 3, 4, 5, and now the B minor over A, so simply take your first finger and move it up so you’re 5th string is now open but you still barring across the other strings but in this case I guess it doesn’t actually matter because you’re not playing the 1st string anyway so you could just simply remove that finger so starting on measure 10 major 11 to a G,  to an A, so it’s got that same hammer-on pull-off thing that we did before to a D.

Now on this measure if you notice that beats it’s all eight two notes so beats one and two is straight. You’re B chord is strings 4, 3, 2, 4, and now four beat number three you’re going to place your fourth finger down on the 3rd fret of the 1st string like you’re doing D suspended 4 and you’re going to pick that and then you’re going to take that finger off and you’re playing the 2nd fret and then string 2 and then string 3 so that measure and then for the last measure still on a D just strum the chord like that let it ring out if it’s as a whole note so that whole third ending.

I hope you enjoyed that and got something out of it. It’s a cool riff just play on the guitar or look up the lyrics and try to sing along, guys got kind of a high voice so good luck anyway if you like this video subscribe to our You Tube Channel and we’ll see you in our next video lessons, thanks for watching.