How to Play The 12 Bar Blues in E7 Guitar Riff

It´s a blues riff in E7 over a 12 bar chord progression. 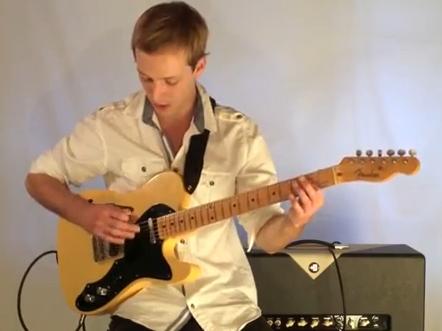 How’s it going everybody?
My name is John McClennan and I’m here
with guitarcontrol.com, bringing you
another lesson. This is again based
off the 2-barre blues, which is one
of the most common chord structures
in music.

We’re looking at sort of a, in the style
of Jimmy Page, rhythm. Lots of people
may know your typical 12-barre blues,
like this, just the very guitaristic
cliche, but to show you a little twist
where you can just mix that up a little
bit and a recording for reference would
be “Bring it on Home” by Led Zeppelin.
This is the kind of thing that he’s doing.

He starts on an E chord. You have the
open E and the 2nd fret on the 5th string.
So those two notes together. You play
one-and, and then on the next beat your
3rd finger is going to go on the 4th fret.
It’s going to replace that note that you
just played on the 2nd fret. So one-and,
two-and, then you go back, three-and, and
then on the last beat, on beat four,
you’re going to play a triplet, which is
three notes in one. What you’re going to
do is hammer on the low string, 3rd fret
to the 4th fret. And then I put my 1st
finger down on the 2nd fret of the 5th
string. So it sounds like this all together.
And that’s beat four: four-and-a.
And then you start over.

So it’s one-and, two-and, three-and,
four-and-a; one-and, two. And then you
can add what’s called palm muting, where
you take this part of your hand and you
lay that back here where the bridge and
the string meet. And you’ve got to get
way back there. If you’re too far forward
you’re not going to get any sound.
You want the notes to pop-out so you get
this sort of sound.

And notice, that last note I’m kind of
bringing up the muting. I’m not muting
as much. So one-and, two-and, three-and,
four-and-a. Then, of course, you can apply
that same thing to the next chord in the
blues, which would be the A chord. Back to E.
And then you might just want to go to B here,
which would be 7, 9; 5th fret, same thing.

All right, blues a la Jimmy Page.
Once again, click the link below for the
tabs and we’ll see you guys later.
Thanks for watching.