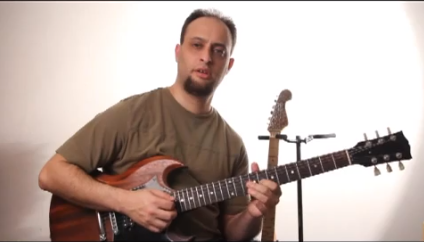 Check out this free Johnny Hiland Lesson – Johnny Hiland Lick for Blues Guitar from Guitar Control. hey guys… Johnny Hiland is one of the best blues guitarists on the scene today. I was inspired to decode one of his shreddin blues licks for you. I didn’t work it up to speed as fast as Johnny does, maybe another day… But feel free to play it as fast as you want. The really cool thing is how he uses the irregular rhythmic grouping of 5 over 4 (16th notes), yet it sounds totally natural and musical. Check it out.

Here’s a bit more information on reading tabs and also those hammer ons from nowhere. Hey, guys. I’m Claude Johnson from guitarcontrol.com and that was a Johnny Hiland style blues lick. Let me break it down for you, step-by-step. I’m going to break that lick into four pieces. Basically we’re in the C pentatonic box. The first part goes like this. We have 11th fret with our pinkie on the B string; 8th fret on the high E string with my 1st finger; and then 11th, 10th, 8th and back down to the 11th. And then we hit this twice. That’s all the first part. So real slow. You can pick this however you want. I’m not sure exactly how Johnny picks it, but what I’m doing is downstroke, upstroke, downstroke, pull-off, pull-off, downstroke, downstroke, upstroke, pull-off. That’s all the first part. Check the tabs. Please check the link below, get the exact tabs. It will make it easier for you. And then the next part goes like this. This repeating lick. It just repeats three times, going straight down the pentatonic scale. Just four notes down. You and pick this any way you want. One easy way to pick it is simply just to upstroke the high E string and then the rest is all just hammer-ons. You can also pick the last note to get a little more definition. Again, that’s three times. So far, the first part. And the next part. Okay? Now, the third part of the lick is like this. It’s basically a sweep pick down from the 8th fret on the two highest strings and then 10th fret of the G string. Pull off and back to our 10th fret D string. So far… And then the last part is like this. Three notes a string, legato. It’s a hammer-on and pull-off, 8th, 10th, 12th. D string. Pivot back and then… And the interesting part of this is the rhythm. So if you have the first part… It’s kind of a triplet feel there. By the way, I’m only playing it maybe like 65%, 75% of as fast as Johnny’s playing it. I’m going to have to drill in a little bit more to get up to full speed, but it’s just a matter of practice and if I can do it, you can do it. So check the tabs, once again, and work this lick and I hope you have fun with it.

hi Friend, Johnny Hiland is one of the best bluesguitarists in the world. And you’re about to get a little bitof his guitar magic into