How to Mix Melodies with Fingerpicking Guitar Chords 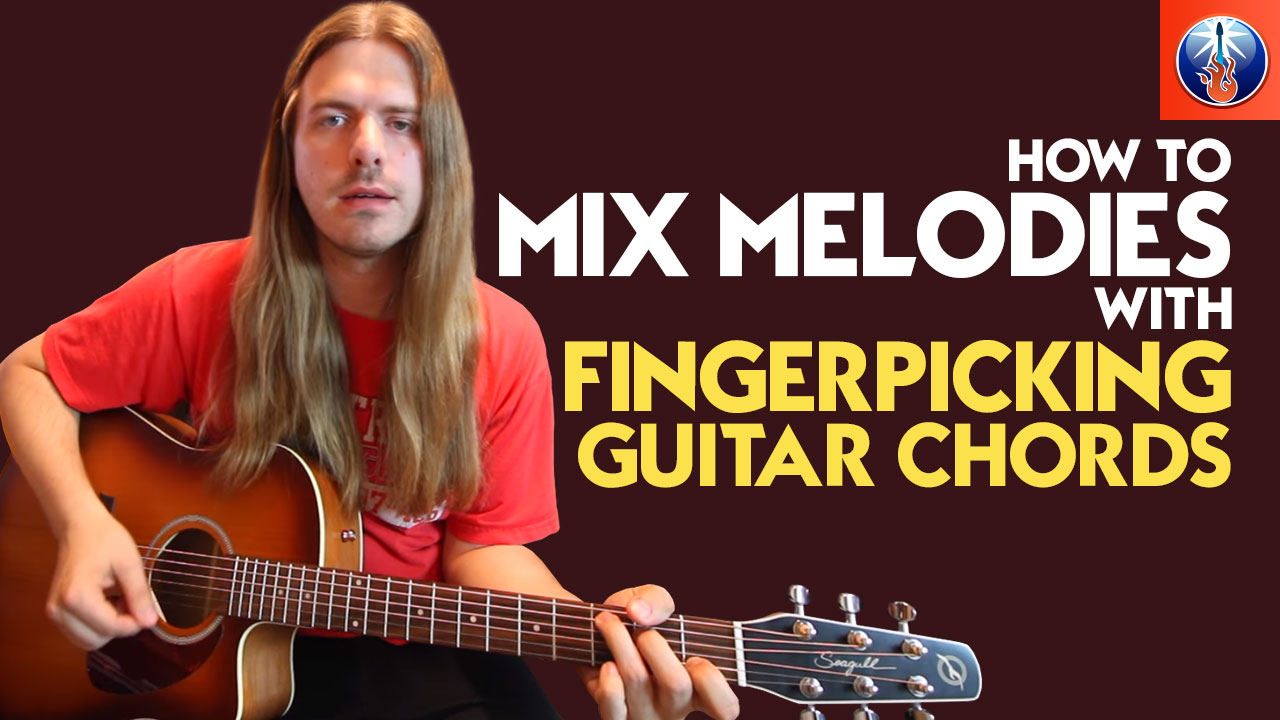 How to Mix Melodies with Fingerpicking Guitar Chords

In this Guitar Control video, Robert Baker gives us some fingerpicking guitar lessons. Not just normal fingerpicking though, picking in melody inside of our chord. So we are going to take a very simple chord progression, just a G, to C to D, back to C back to G. But we are going to have a simple melody line that’s happening at the same time we are fingerpicking these chords. We will go more in depth below. This concept is often referred to as chord melody. You play the chords but also use notes within or nearby the chord to play the melody without lifting your finger from the chord shape.learning how to mix melodies with fingerpicking guitar chords is such a great, incredibly useful tool for songwriting.

Like you’d expect any of our fingerpicking guitar lessons to start out, Robert plays an example for us. What is happening here is he is fingerpicking everything. There is a simple melody line all played in the open position. Then we add the chords on top of it, playing both the rhythm and the lead guitar at the same time.

The first thing you should do is really get this change down. If you are not used to fingerpicking this can be a little challenging, hitting two notes at the same time. So practice switching back and forth between alternating the note played on the 1st string from your ring finger on the 3rd fret to open to pointer on the 1st fret back to open and then repeating all over and over. Feel free to practice at whatever speed you are comfortable with.

If you are enjoying this fingerpicking lesson be sure to also check out our other guitar control video on finger independence exercises.

Robert adds his pinky to the 3rd fret 2nd string, still holding down the 2nd string 1st fret with his pointer, and then takes a very similar approach to the first shape we played. The reason it’s ok to have both fingers on the same string is because the guitar only picks up the note closest to the sound whole, so while the pinky is held down on the 3rd fret 2nd string you will not hear the note on the 1st fret that your pointer is holding down. Start by plucking the 5th and 2nd string together. Using your thumb and ring finger, thumb of the 5th string and ring finger on the 2nd. Then pick the 4th string with your pointer, of course all while holding down that open C major shape and then pick the 5th string also with your pointer finger, while still holding down the open C major shape.

Then do the same exact picking pattern but this time pick your pinky up so now when you play the 2nd string you hear the 2nd string 1st fret you are already holding down in the open C major shape with your pointer.. So 5th and 2nd string together, followed by an open 3rd string and then an open 4th string.

So a few things you might want to do while fingerpicking are muting the lower strings. Robert purposely tried not to mute in this video but a lot of times muting the lower strings can be helpful. The strings you are of course not using in the chords you are playing. If you mute you can be a little more percussive. Robert demonstrates both ways. Muting tends to clean up the playing a bit. Keep your picking hand very steady and you will also notice that Robert keeps his fretting hand very steady as well and calm and relaxed.

Playing guitar in general you want to always play calm and relaxed, but with finger picking especially if you get too tense you end up plucking either your low or high notes too much and they just end up drowning each other out and we don’t want that. We want to have a nice, even flow where you should be able to hear both strings ringing out clearly even though some are lower and some are higher, it’s all about that picking hand control.

Recap: How to Mix Melodies with Fingerpicking Guitar Chords

I hope you enjoyed Robert’s fingerpicking guitar lessons. Whenever you add that melody line into the rhythm of just playing some simple, open chords, it is simple but so effective. Sometimes the best thing, is just some simple chords. Be sure to follow along carefully and slow these examples down, pay attention to the fingers you should be using and isolate any difficult transitions between chords and the melody line. Practice both the melody line and chord changes separately, and of course, as always, have fun! That;s what guitar is all about!