How to Write Guitar Riffs the Easy Way

There’s tons of ways to write – but here’s some nice insights from Jack Frost… Check it out!

You know, I look at a guitar differently than most people.
I look at it as this. This is your guitar, this is your
second guitar. It depends if you’ve got 22 frets, 24
frets, 23 1/4. I mean, it doesn’t matter. There are
some guitars that are 35 frets. Who knows what it is?

But I look at it as you have two guitars in your hands.
Work on the structure. You don’t need to go, okay, I
have to write every single fret on the guitar right now
or it’s not going to sound good. That’s not correct,
because the Ramones, they pretty much lived the life
of like four chords. But they took those four chords
and they made them sing every which way they could.

So, we talk about the boxes. So let’s start from, I
don’t know, let’s make it easy for the beginning and
then we’ll build. Let’s just start off an A and kind
of like a B in this pattern here. I think that’s a
cool way to walk. Take like the 3rd fret to the 7th
fret in this pattern. We don’t need to use the whole
neck the first time we do it. So let’s try this. We’re
just going to walk. There you go. Look what we just
did. I just kind of made this up as I went along.
It’s not hard to play; it’s not brain surgery, but
it says something. I hummed it. I just gave a little
bit like a… So I went from my A to my B, and you can go…

But I think you want to play power chords for this because
it’s just more throaty. When I say throaty it’s just like —
it’s got something there. I’m not saying, again, I know so
many people look at this and they look at things and go,
oh, it’s metal, metal, metal. It’s not metal. It’s talking
about chords. It’s not just a metal chord. B.B. King never
did an A power chord? I mean, yeah, he did. And it’s like
Keith Urban never played a power chord, or Brad Paisley
because it’s too metal? It’s a chord. There’s no book that
says you’re not allowed to play that chord because that is
the devil’s music. Whatever. There’s always people that
have to say weird stuff like that, but we’re talking
about chords right now.

Now we can take that and we can really have fun with it.
Again, we’re in that box. We didn’t move from the box.
We stayed in there. We didn’t add any chords, we didn’t
change any chords, we just mixed it around.

What I did was I took it and I kind of made a scale out of
a rhythm. Basically a scale and a rhythm are so much alike,
because when you really think about a chord, the scale is
in the chord. Like you’re playing a C major, it’s a C chord.
There you are and you’re pretty much walking.

So let’s try this and just change our rhythm patterns.
We’ll down it first and then we’ll have a little fun
with the right hand and we’ll see where we go with it.
And then I bet you’ll find something interesting. Here
I am; I made my rhythm. So we changed it.

Now, we’re going to take the same pattern; mix it up.
Basically I could write 20 songs in that pattern right
there, and I just showed you in a box. It was basically
just the same pattern. But I attacked my right hand
totally different every time I did it.
So we’ll do this slow together. 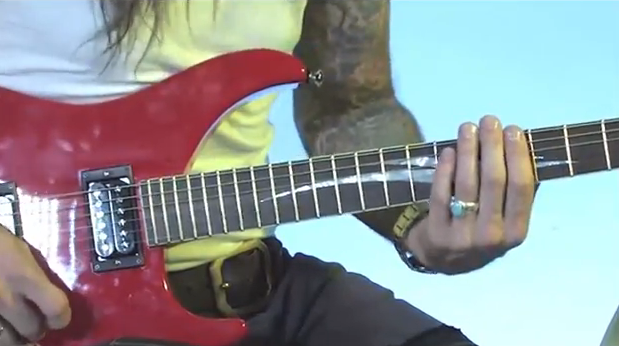 Learn to play three fun and easy power ballad riffs from the 1980s with Guitar Control instructor Darrin Goodman, aka Uncle D. Be sure to

Burn Your Fretboard With This Guitar Lick!

Burn you guitar fretboard with this killer lick. Check out the video and be sure to download the tabs! Link for video 🔥 Check out

Learn to play three fun and easy beginner riffs from the 1960s with Guitar Control instructor Darrin Goodman, aka Uncle D. Be sure to get