Hey, how’s it going this is Darrin Goodman with Guitar Control, I want to show you some of the riffs from the song “Tush” by ZZ Top. 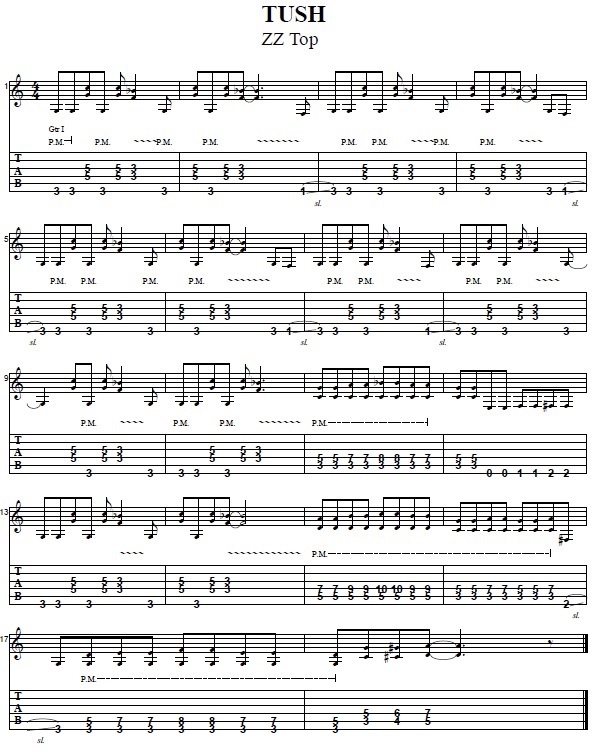 This starts off with this this cool little riff that would have done in the key of A, it would have been much easier because we could just use the string in G so it makes a little bit more difficult so you take your first finger and you’re going to pick up the 3rd fret of the 6th string G, but you want to borrow your finger across, so you’re getting the 3rd string and then go to the 5th fret on the 4th string with your third finger and the 5th fret on the 3rd string with your fourth finger so you got the G and then back to the G back to the fourth in those fingers on.

Then we move down to the 1st fret and pick that note on the 6th string and F and slide back up in to the 3rd fret so that’s the whole  intro for it and then it’s basically just like a 12 bar blues you know 1, 4, or 5, you know it’s G, C, and D so after you do the little intro part it continues to play that same riff but it’s a slight variation on it so if you’re if you’re thinking about how you would a 12 bar blues that should be your one chord and then you know the G and then from there we go to a C and it’s little shuffle pattern so you’re on the 3rd fret of the 5th string with your first finger the 5th fret of the 4th string with your second finger and then your 4 fingers going to go all the way up with 7 and then up to 8,  and third fret of this string stays the same so we’ve got 2 with 5 to A 7, to with 8, to with a 7 & 2 & 5 and then the open 6 string twice 1st fret twice 2nd fret twice and then back to the 3rd fret, then we’re going to go to your five chords.

So we’re going to be the same thing that we did here on the 3rd fret  and we’re going to move it up a whole step so now your first fingers on the 5th fret of the 5th string and your second meter is on the seventh fret of the first of the fourth string back to the third so back to your 4 chord and then we do that same sequence or doing on the 4 chord but we move it into the 6th and 5th string so it’s our one chord and then that’s like your turnaround so it’s just C 5 C sharp line and then it just basically starts over again.

Now if you have smaller hands or you’re fairly a beginner and you haven’t really gotten good and be able to get this span between your fingers, I’ve got very small and short fingers so you know I can do this part but it’s still I have seen a lot of my private students find this difficult so an alternative way you can do it is instead of playing the 4th or the 3rd fret bit string you can go up to the 8th fret on the 6th string and do the same thing, now the frets are a lot closer together so it’s a little easier to play and then you go to your 5 chord that start at the 10th fret so it does make it a little bit easier for the stretch but still when you go back to the one chord you still have to do it up here so  it still could be fairly challenging for you starting off.

I hope you enjoyed that and got something out of it leave me a comment down below you know if there’s anything that you’d like to see me or any of the other instructors of guitar control, if you liked the video give me a thumbs up and be sure to subscribe to subscribe on our You Tube Channel and we’ll see you in our next video lessons, thanks for watching.

Acoustic Guitar Lesson On How to Write Killer Riffs