How To Play 3 Little Birds by Bob Marley | Reggae Guitar

Here´s a cool guitar lesson about how to play

Hey, how’s it going? Claude Johnson here from guitarcontrol.com
and today’s lesson is how to play “3 Little Birds” by Bob Marley,
which is a great song and it’s very simple. So let’s go.

We can play this song with just three chords. We’ve got an A
major, which I’m using my 1st finger to bar on the D, G and
B string; D major and E major. So if you’re not familiar with
basic chords just go check out guitarcontrol.com/beginner.

There are two sections of this song: a verse and a chorus.
So let’s start with the verse. It’s basically just A to D.
We’ve got two bars of A, one bar of D and then one more bar
of A. For example… Second bar. There’s your D, back to the
A. And what you can also do, make it sound a little bit better,
is you throw this little lick in. On the recording that’s
actually played by a keyboard or synthesizer. But we can just,
you know, if we’re playing with an acoustic setting, we’ll
just cover that part with our guitar as well. So you notice
when I went to the D chord I didn’t play that, I just stayed
with a D and then back into that A. So that’s the verse.

If you’re just starting out and you can’t play that lick,
don’t worry about it. I just, you know it sounds fine just
to… I’m just doing like a real simple chop rhythm. One,
two, three, four. So that’s a real simple way to play it.

Now if you want to play this lick, it’s basically starting
off on the A note on the 2nd fret G string, and then we’re
going to go up two frets and back with a hammer-on, pull-off.
And then up to your 5th fret B string, back to the 2nd fret of
the B string. So far… Again. And then back down to here. What
I’m doing is I’m playing it with the A. So I go… So instead
of just… I’m hitting into that first chord while I’m playing
that first note. I like to use my pinkie. For whatever reason,
it’s just a little easier.

Don’t get too wrapped-up in like which strings you’re getting.
As long as you’re playing that chord, you can play it like…
Just these two or these three. It’s not, you know, you don’t
have to be that precise. As long as you’re strumming that A and
then… All right?

Now, the verse, I like to switch-up from that chop feel to
more of an open strum sound. So we’ve got… That kind of a
feel. So it’s just a real simple… And the chords are going
to be A, basically two bars of A, two bars of E, back to your
A — everything gets two bars here. So you have A, E, A again,
then up to your D, then back to your A and then back to your
E and then finally you end on A. So once again: A, E, A, D,
A, E, A. Okay?

Finally, when you land back on your final A you can throw
this in. Right? That’s just another thing you can throw in,
a solo acoustic arrangement. But then, as soon as you’re
done with that, you go right back into the verse. So it’s
a pretty simple song. Again, if you can learn just three
chords you basically have it. So have fun with that.

I hope you enjoyed that and keep in mind that’s just my
personal rendition of how to play the song. And if you
want to learn real, authentic, reggae guitar from a Jamaican
legend, checkout our reggae guitar course, which is called
Reggae Root Guitar Secrets. You can read more about it at
guitarcontrol.com/reggae. So go ahead and type that into
your browser right now, guitarcontrol.com/reggae and check
it out and I’ll catch you next time. 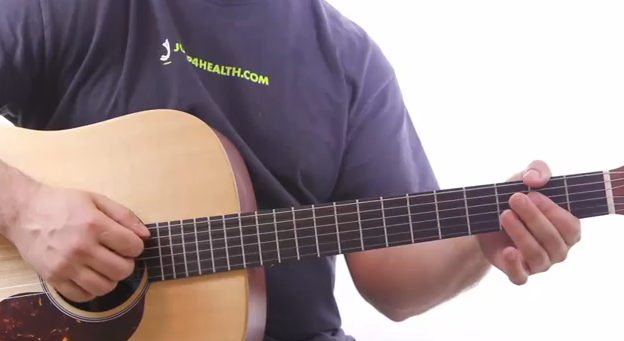