How to Play Rock N Me Chords

In this Steve Miller Band Guitar Lesson – How to Play Rock N Me Chords, brought to you by Guitar Control Instructor, Robert Baker, Robert is going to breakdown the Rock n Me chords and main riffs. This is a great song for an intermediate guitar player. But there are still a lot of really techniques and ideas that beginners can use to start to grasp these concepts. Lots of muting, straight up blues style rhythm parts, and hammer-ons. And how to write simple, but powerful lines with lots of attitude.

This riff is so cool. It’s very original and very much makes you think of the Steve Miller band. You start it by barring your pointer finger on the 9th fret on the 5th, 4th and 3rd strings. You are basically barring a B chord but with an E on top. So you are going to strum down on your barred 9th fret and then hammer-on to the 11th fret on the 5th string only. So strum the bar, hammer-on and then pick up, strumming just the higher notes of the bar, focusing on the 3rd and 4th strings. Then repeat this four times and go back to the chords we did in the beginning. So this hammer-on riff breaks up the straight chords. This riff can be kind of tricky if you aren’t familiar with barring. If you are having trouble feel free to isolate these changes and work on them in sections instead of all at once. So if you haven’t mastered hammer-ons yet, just kind of break it apart. You don’t always have to do everything at once, you can just practice the actual hammer on and then add in the details of the strum after you have that mastered. To learn another awesome song full of hammer-ons check out our video on how to play Crosstown Traffic by Jimi Hendrix.

So this rocking riff starts on the F on the 6th string. Even though Robert is using distortion in the lesson, the Steve Miller Band actually uses barely any. This song is super driving though so feel free to use some if you want to make it sound heavier. So starting on the F# he plays the 6th string 2nd fret to the 6th string 5th fret. Then he does the same thing on the 5th string, picks the 2nd fret then the 5th. Then roll your pinky finger up from the 5th fret 5th string to pick the 5th fret 6th string again. Then end this phrase but picking the 5th string 2nd fret with your pointer finger. That whole riff uses alternate picking, which means every note switching from a down pick to an up pick, or more often referred to as a down stroke or an up stroke, meaning down is when we pick towards our fret on the top of the string and up is when we pick up towards our face on the bottom of the string. Repeat this entire riff twice. Even though they play it very clean it’s fun to crank up the distortion of this heavy riff. Also be sure to palm mute this entire riff. Palm muting is when you kind of karate chop your guitar with your picking hard against the strings very close to the bridge, you can even rest on the bridge a little if you like. You leave your picking hand touching the strings while you pick to create a tighter more controlled sound. Much more staccato than when you do not mute. So to put it simply, tighter sounding, almost restricted, not letting the strings ring out.

Then you are going to stay on the B5 for one more measure but this time you just do the first half of the blues shuffle, not the extra pinky stuff. So two strums on B5 then move your pinky to the 9th fret, strum one, and then bring it back to B5 and strum once. Repeat that a total of four times. Then same thing on the A5, and then back to the fancier shuffle when we go back to the E5 so this has the normal shuffle plus the pinky moving from the 12th to the 11th frets. Then B5 with the fancy shuffle and then B5 again with a straighter shuffle, the one without any extra funky stuff the last time but this time in the second measure you accent the down beats making them stand out more. Then back to the main riff!

Recap: How To Play Rock N Me

I hope you enjoyed learning how to play Rock N Me by The Steve Miller Band. This song is a lot of fun and has a few pretty interesting parts that make this song stand out. Remember to break down any hard parts and isolate your changes. It doesn’t matter how fast we learn it if we don’t learn it right. So slow these riffs down, pay attention to details, and most importantly, have fun! 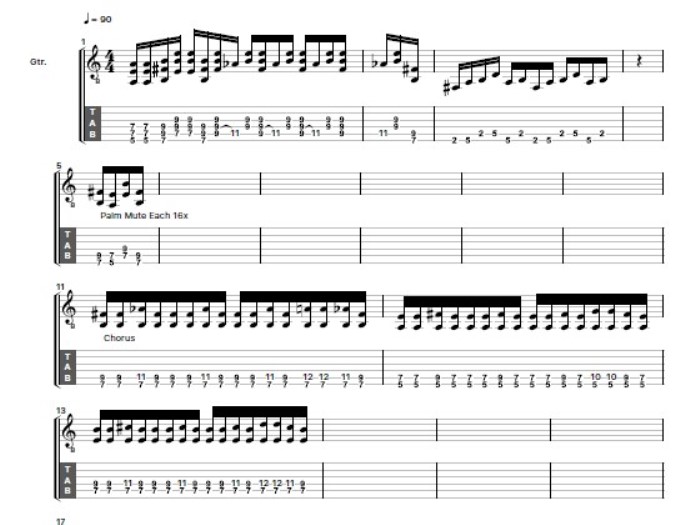 Thanks for watching How To Play Rock N Me By Steve Miller Band.

How to Play Steppin’ Out Guitar Riff by Mayall With Clapton

How to Play Cold Shot by Stevie Ray Vaughan