The Internet is full of acoustic blues lessons. You can find blues scales, blues chord charts, and blues fingerpicking lessons online, as well as videos that cover some of the basic blues techniques essential to playing acoustic blues guitar.

Check out this VIDEO GUITAR LESSON ON A BLUES TURNAROUND

At its core, blues on acoustic guitar isn’t different than blues on an electric guitar. The fundamental elements are the same — the blues scale, as shown below, and the twelve-bar blues progression, also shown below. Note the use of Roman numerals in the 12 bar progression. These numbers represent the chords that are played and are determined by the key you’re playing in.

Blues techniques are also part of any good acoustic blues lessons. Note bending, finger slides, double stops, and bottleneck playing are techniques most often associated with blues guitar, whether on acoustic or electric. The example below shows a practice piece that uses bend and release, essential to blues guitar. 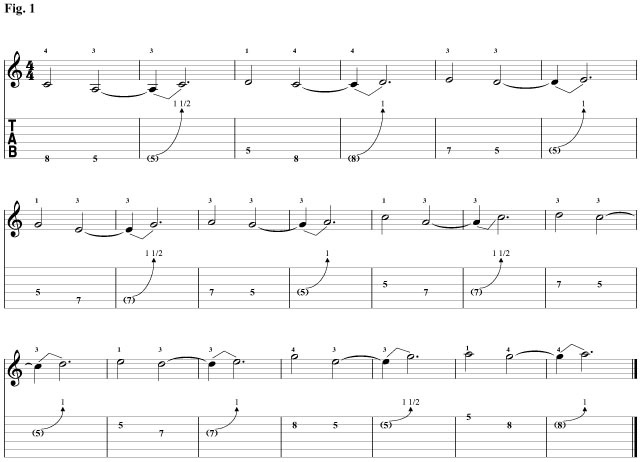 The next example is an easy blues fingerpicking exercise that incorporates double stops and an ascending melodic pattern over seventh chords.

The main thing to remember about the blues is that it is music played from the heart and soul, and while you can study the theory behind it as much as you want, playing the blues and listening to the blues is going to benefit you as much as any studying. Listen to as much of it as you can, from the early players right up to the modern guitarists carrying on the tradition.

Record a twelve-bar acoustic guitar progression and then play it back so you can practice playing over it. This is a great way to practice the acoustic blues lessons you want to work on, but it’s also a great way to train your ear and build your improvisational skills.

If you are a blues fan, I recommend you to GET this course:

Learn Still Got The Blues With Free Guitar Tab

How To Play Blues Riff in G On Electric Guitar

How to Play Shuffle Feel Rhythm on Guitar

Easy Guitar Riff From I Still Got The Blues