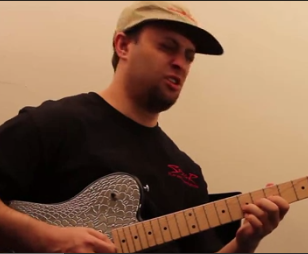 Hey, guys. Claude Johnson, and I want to
talk about the blues today and show you
sweet Beginner Blues Guitar Lesson.

You can experiment by using palm muting for a different
sound or let it ring open. You can even pluck it, like
pick the low string with the pick and then pluck. My
middle finger is going to pluck the A string.

Play around with that. It’s very important to get a
sound that you’re comfortable with. Like Yngwie said,
if it sounds right, it’s right. So get the basics down
and next time I’ll show you how to throw in those little
single note licks with your rhythm playing.

That’s all I’ve got for today, but I will catch you next
time. So have a great day and thanks for watching
this free killer blues guitar lesson.

Check out this free Three Easy Killer Van Halen Riffs from Guitar Control instructor Darrin Goodman. Be sure to click the link for the free