Check out these beginner blues lessons!

Hi. I’m Claude Johnson from guitarcontrol.com. How’s it going?
Today we’re going to talk about blues guitar, beginner blues guitar.
If you have a lot of experience all ready, please checkout some of
our other videos. We’ve got a lot of great stuff on our channel.
Also, you can checkout either guitarcontrol.com or howtoplayblues.com.

If you want to play blues the first three chords you should probably
learn are E7, A7 and B7. If you notice, all those end in the letter
7, so they’re known as what’s called 7th chords or dominant 7 chords.
The main difference, again, I’m not going to really go into the theory,
but they’re basically four-note chords as opposed to your ordinary major
and minor chords, which are also called triads and have three notes.

For example, let’s just listen to the difference between the E major
and E7. So here’s E major. It’s a three-note chord. Now even though
I’m strumming all six strings, you’re getting some repeats in there.
You’re getting an E on the bottom, the B, an E again and then G sharp,
then you’re repeating the B again and then one more E. So it’s just
really E, G sharp and B gives you that sound.

Now E7, if you hear that, it has a richer, more complex sound. Here
we’re playing the E, B and instead of the E again, we’re playing a D.
That’s what gives it that complex kind of sound. All I’m doing here is
putting my middle finger on the 2nd fret of the A string and my first
finger on the 1st fret of the G string and I’m just playing all six
strings. That’s your E7.

These are the three chords that you would need to play a blues in the
key of E. Depending on what key you’re in, you’ll need some different
chords. You don’t always have to use dominant 7 chords. You can play
a blues with major chords, minor chords, anything you want, but the
classic blues sound, the most common and the most bluesy is going to
be those 7th chords or dominant 7th chords.

Again, please learn your E7, A7 and B7 and we’ll use them in that
next video. If you’re really into blues and you just want to go
right to a great course to learn all this stuff, instead of just
watching random YouTube videos, check out my course at
howtoplayblues.com. I think you’ll really love it.

That’s all for now. We’ll catch you next time. 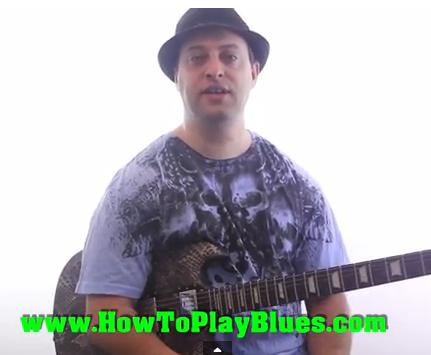 How To Play Some Blues Guitar Riffs From Eric Gales