Hey, how’s it going this is Jon McLennan with Guitar Control, I’m here to teach you a song called “Bring it on Home” by Led Zeppelin. These bands roots were the blues and this song really demonstrates it. 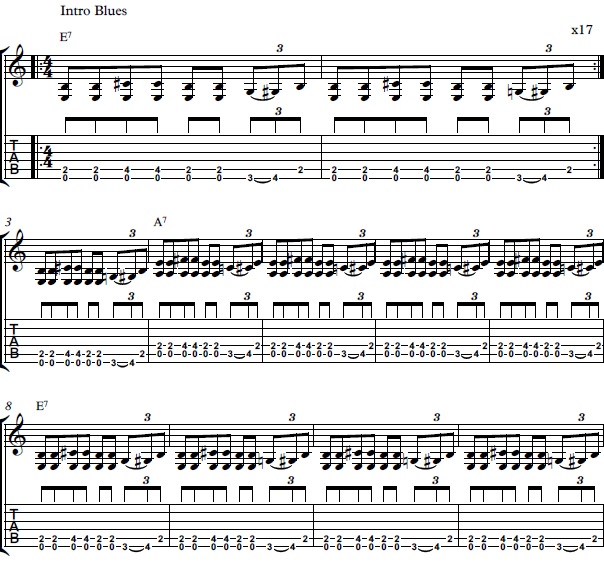 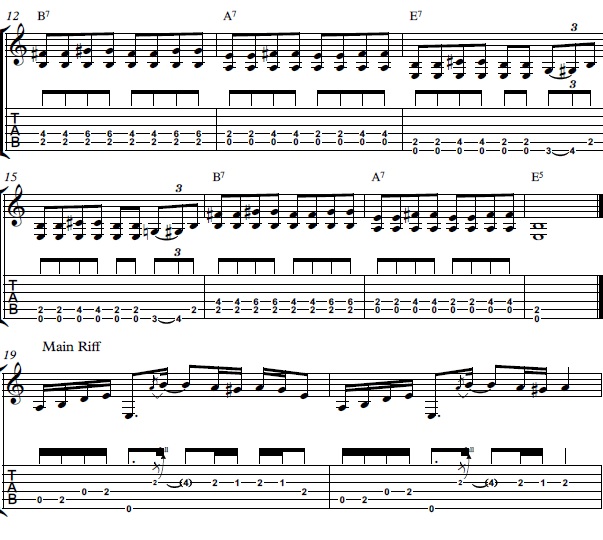 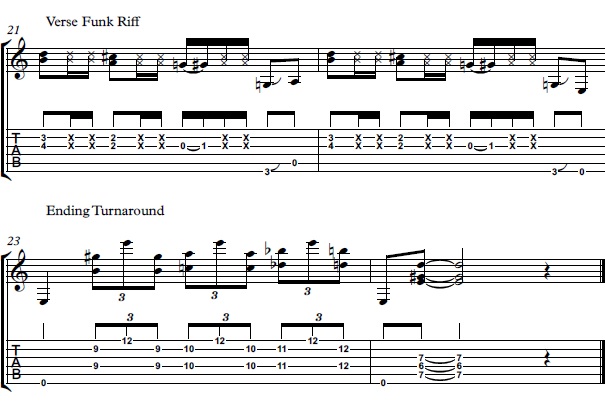 I’m going to break it down for you in a couple of sections, we’re going to learn that Intro blues part then we’re going to get into the main riff of the song. We’re going to play a funky 16th note rhythmic pattern for the verse and we’re going to end with a classic blues turnaround.

I’m putting my palm right where the string and the bridge meet. To me the blues sounds best palm muted, so I’ve got open second fret and I play that twice with a down pick of my right hand and then my third finger goes on the fourth fret and replaces that note on the second fret and then go back to zero, two, so we’ve got one, and two, and three, and one, and two, and three, then on beat four.

We do this little lick called hammer, you’re going to play the 3rd fret of the 6th string and hammer-on to the 4th fret then play the 2nd fret of the 5th string. One, and two, and three, this is the beginning of the tune and I counted it out it’s actually thirty five bars of E, 1 and 2 and 3 and that would be one bar 2 all the way up to 35. To me I listen to the vocal melody that’s cues me when to go to the A chord.

So if you’re thirty five bars of this and then you’re going to go down one string and do the same thing in, then back up and then we’re going to end with this turn around. What I’m going up to a B chord, the five chord plank putting my first finger on the 2nd fret, third finger on the 4th fret. I’m doing basically a B5 chord this root 5th, root 6th, is basically a movable version of what we’re doing on the open strings and we just end there on 0 and 2.

Let’s dive into the main riff, page digresses from that nice clean tone at the beginning and ramps it up for the next part of the tune we’re going to start with the open A-string and then we’re going to play the 2nd fret and then do the same thing on the next string down 2nd fret.

Your pick comes up and you play low E, and I like to do them all on down strokes with the right hand then move up to the 3rd string 2nd fret and I’m using my third finger. For these you can use your second if you want, I know that I have this bend coming up right here on the 3rd string and it’s a whole step bend and because I’m so close to the nut down here, if I can avoid it, you know bending with just one finger. I’d never do this like lift my third finger and not to put other fingers behind it, so I always get the extra strength using my thumb as a fulcrum here. What I did was bend up on the third string my other fingers behind it and then back, then I go to that natural two.

Then on the second measure same thing, you just stay on that 2nd fret of that note A, So it’s one E and then two E, to give it a little vibrato. If you’re having trouble with this, click the link below you can get the tab to follow along all right.

After that main riff we’re going to get into this funky 16th note rhythmic pattern, there’s a number of layered guitars on this track but what I’ve tried to do is combine and break it down as to if I was just one guy in a band. What I came up with, I’ve got my first finger on the 3rd fret 2nd string and then second finger on the 4th fret 4th string, play those two notes together or 4th fret 3rd string  and then you do, two down up.

I’ve just muted the strings and get that sound and then go back and play two and two on those same strings 2nd frets and then do two mutes again. So it’s 16th note that’s gives that funky rhythm, then I do a hammer-on and play an open G, hammer-on to the 1st fret and two more mutes then I reach down and play this 3rd fret giving it a little pull of personality and then play open A, that’s measure one.

Measure two is exactly the same except for the last note; instead we’re going to go alternate. It’s pretty awesome then we connect it back into the main riff and then finally we hold that last note and we’re going to tag it back with our original blues. The tune ends going back to a tag of the beginning let’s break down that final blues turnaround so coming out of that main riff you’re holding the 2nd fret and you’re going to play the final cadence of B to A to ease what we were doing earlier. And again we’d play a palm muting and we’re going to tag it with this final turnaround lick.

We’re going to play open E and then play nine and nine on the 2nd strings. What I would do is do what’s called a hybrid picking so I put my pick here and then my middle finger on the 2nd string, so what’s happening is these two notes are moving up and half step twelve and every other note is the key.

That’s the fingering that I use first, second, and my second, and third, and then you slide off it so one and a two, and then you can play this which is basically seven, six. I really hope you enjoyed this lesson and it helps get your playing to the next level for further information you can click on the annotation on the screen or the iCard if you’re on mobile and you can check out one of my courses if you’re watching this video I have a course called Blue’s power that is very similar to this. Make sure to subscribe on our You Tube Channel and we’ll see you in our next video lessons, thanks for watching.

Learn To Play A Easy Bluesy-Rock Lick In A Minor