6 Secrets to Being a Better Guitarist

Check out this video from Jon on 6 killer tips for improving your guitar playing.
By the way, this is really just scratching the surface of what’s in his
Fast Track Guitar System.

Hurry, only 1 day left to take advantage of our special launch deal…

Rhythm Guitar Lesson – 6 Secrets to Being a Better Guitarist
Hey, how’s it going, guys? This is John McClennan and here
with guitarcontrol.com and I’m going to give you six tips
to being a better guitar player. By the way, these are
just scratching the surface of what’s on my new
Fast Track DVDs. So let’s check it out.

Secret number one is learning how to figure out songs that
you like by ear. So you have to be able to distinguish
between major and minor chords. One of the things that I’ll
first do when I’m listening to a recording is I’ll find
the bass notes. So I just play on my instrument along with
the recording the bass notes. Then I try playing either —
once I find the bass note, I try playing either a major
chord or a minor chord against that. And if I still can’t
tell then I’ll emphasize just the 3rd of that chord. So if
it’s G major I’m going to play either a B or a B flat and
find out which one sounds best against the recording and
then I know what chord it is.

Secret number two, how to get the best sound from your fingers.
You have to put your fingers right up close next to the fret.
Remember, the fret is this metal thing. So if you’re playing
a D chord and all your fingers are back here to where the notes
sound a little buzzy, you’ve got to make sure that they’re right
up close next to the frets. Check yourself on everything you play,
whether it’s a single note or a chord just to get the right sparkle.

Secret number three, how to expand your chord vocabulary by
developing the right chord muscles in your hands. You can
take any chord and you can practice it up and down the next,
just moving in half steps. Let’s say that you’re working on
a minor 7th chord and you’re trying to get this bar. You’re
going to play four strums and then you’re just going to move
it up a half step, and you can try actually taking your hand
off the instrument and then putting it back on. It forces you
to kind of start from zero and this is a real great way to
learn new chords fast and then, of course, applying them
in a song.

Secret number four, how to master your barre chords. The best
way to do this is through the application of songs. So you
want to be able to work on any chord progression. Let’s say
you have a C sharp, you have to find out where that root note
is, so you want to know your root notes on, to begin, just
the 6th string and then also the 6th string. Then you have
to plug-in what I call one of the big four, which is either
a major barre chord here with the root on the 5th or a minor,
and then also knowing it as well here, major and minor with
the root on the 6th. Once you learn the Big Four you’ll be
able to play any chord in at least two different places.
This really comes in handy when you want to play your
favorite songs.

Secret number five, master the critical strumming patterns
you need to know that come up everywhere in music. First of
all, I’ve taught a lot of people over the years and they say
they have trouble with rhythm. One of the things that I
immediately have them start doing is you have to tap your
foot with the music and you have to understand the connection
between your hand and your foot. For instance, if I’m playing
a basic 8th note pattern, like one-and, two-and, three-and,
four-and, the strong beats, meaning one, two, three, four,
are all on downstrokes and the weak beats, the ands, one-and,
two-and, three-and, are all on upstrokes, just like if my foot
taps down: up, down, up; one-and, two-and, three. So once you
start tapping your foot and you start counting out loud you’ll
find that your rhythm instantly is going to improve. Then you
just work through a number of tunes and examples, like what I
do in the Fast Track DVD Course. I show you all the primer of
the basic chords to get you started and then the famous
strumming patterns that you need to know.

Tip number six is, as you’re working through your favorite
songs and the DVDs, you need to learn chord scale theory.
What it starts to do it take the mystery out of seeing a
chord progression or a chord chart with just a ton of
changes and you go, oh, how am I going to memorize this
chord to this chord? What you start to do is you start
to see familiar patterns in music. There are certain
chords that want to move to other chords. In specific
styles, particularly, you’ll see a lot of the same moves.
So all of a sudden you take this chord progression that
seems so baffling and you can just simplify it and break
it down to just a couple moves. One of the things we’ll
talk about is knowing the Roman numeral system.

If you have a G major scale, G, A, B, C, D, E, F sharp, G,
you have a chord that’s built off every single one of those
scale degrees. That’s where you get the I, the II, the III,
the IV and the V chord and so on and so forth through the
rest of the scale. And then when we’re working through the
tunes you start connecting. Okay, this chord progression is
the I to the IV, and then going back down. Maybe I want to
walk up. And you start seeing how that relates to the scale
and the key center and all of a sudden everything that
you’re playing becomes so much more informed.

Well, I hope you enjoyed these six tips to becoming a better
guitar player. Remember, this is just scratching the surface
of the Fast Track Guitar System DVD series. Be sure to check
it out at guitarcontrol.com/fasttrack. We’ll see you
in the woodshed. 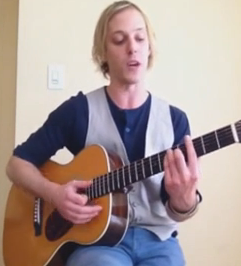