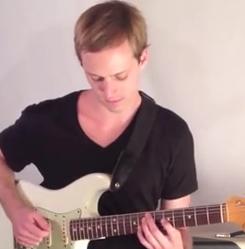 Hey, how’s it going this is John McLennan with Guitar Control, We’re looking at some more Eric Johnson style voicing. I love the way that he plays his chords and, again, I’m just going to reiterate a point with his articulation, is that one of the things that he’ll do is he’ll play the bass note with his pick and then he’ll play the other notes of the chord with his fingers. What we’re going to do is to take this shape, which we may have looked at before on higher strings, is. But now we’re dropping it down to the lower strings. We’re going to go through the key of C and we’re going to basically play what I call the entire chord family of this texture. What I’m doing here is I’m playing the C major. This is a C chord, by the way. So I’ve got the A 5th and the 9th; to B minor, which is 10, 7, 10; move that up a whole step for E minor and then the same as the first chord, just now starting on the 10th fret. That’s this one. Real great chords. Moving up a whole step. You then go to minor. The last chord, B diminished and then C. So B diminished is 19, 15, 19 and then 20, 17, 20 is our octave of this first shape. Again, the chords can be played blooming all together like this, all the notes at the same time, or… Sometimes it’s nice to mix it up. Those are all different ways that you can play those kinds of voicing. And then again, know your root notes so that you can move them. Like, for instance, here, this kind of thing. That would be for an A. Again, know those root notes and then try and apply them even if it’s just for a section of a song you already know or something you want to write. Be sure to click the link below for the tab and don’t forget to subscribe on our YouTube channel and we’ll see you our next lesson thanks for watching.

Lead Guitar: Learn this cool guitar lick in the style of Eric Johnson

Chord Triads in the Style of Eric Johnson