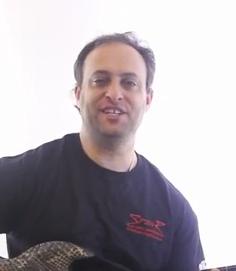 Hey, guys. Claude Johnson here from guitarcontrol.com and
I want to give you a real quick Guitar Lesson on Power Chords
– How to Play Power Chords on Guitar.

Power chords sound like this. It’s neither major nor minor.
It’s sometimes called 5th chord because we’re using the 5th
degree of the scale. What I just played — first let me share
how to play it. Put your 1st finger on the 5th fret of the
low E string and then put your ring finger on the 7th fret
of the A string and then pinkie on the 7th fret of the D string.
It’s called a 5th chord because if you count up from the low
note, count the major scale – one, two, three, four, five –
and then the higher note is the octave. It’s a very common
chord like in rock, especially like punk or metal.

For example… That’s a famous riff from Nirvana. Basically
we’re starting here and we’re moving the whole thing up to
the next set of strings. Then we’re going to the 4th fret on
the low E string and then moving up again.

Click the link in the video description to get the tabs and
if you’d like to check-out my beginner course just go to
guitarcontrol.com/beginner. Thanks for watching.